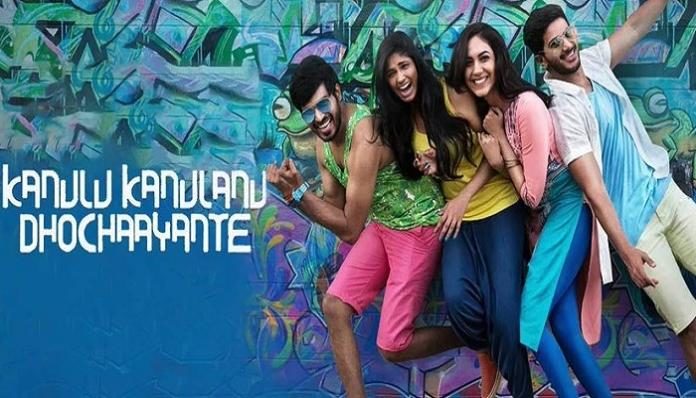 Dulquer Salman is a known face for Telugu audiences with the films Ok Bangaram and Mahanati. Pelli Choopulu fame Ritu Varma has paired opposite him in the movie Kanulu Kanulanu Dochayante which got released today. Director Gowtham Menon has played an important role in this film. Let us see how the movie is.

Sid (Dulquer Salman) is app and gaming designer. He along with his friend Kallis (Rakshan) rents a flat in gated community and gets accustomed to luxurious life. To meet their needs, the duo goes for online crimes. While this is going on smoothly for them, Sid loves Mira (Ritu Varma), his friend Kallis loves Mira’s friend Shreya (Niranjani). While the 4 enjoys their lives, they decide to open a restaurant which needs more money. So Sid and Kallis decides to do more online crimes.

Once they falls in police trap but somehow misses. So they stops and everythings and goes to Goa. Pratap Sinha (Gowtham Menon) comes into the picture to catch them. He reaches out to Goa to only find that the two girls are missing. What happens to them? Why is Sinha in search of these girls too? Find out the answers by watching the movie.

Dulquer Salman is impressive in his role. He looks cool and stylish. Ritu Varma is surprise package of the film. Her innocence helped towards the interval for the twist given. Dulquer, Ritu chemistry is good but there is no logic behind their love story. Rakshan and Niranjani are just okay. Gowtham Menon is impressive in the role of cop. Anish Kuruvilla suited as a rich business man. Others are fine.

Cinematographer Bhaskaran gives the best output for the film. BGM by Harshavardhan Rameshwar is good too. Masala Coffee songs are visually good. Editor could have done a better job by chopping of unnecessary scenes in first half. Desingh Periyaswamy has written fantastic screenplay when compared to the story. However the first 15-20 minutes is a bore. The director is in driving seat in the second half. Overall he has done a decent job.

Kanulu Kanulanu Dochayante will definitely give you a different experience. The movie comes out as a surprise towards the end of first half. In the second half too, the movie has all the twists and turns which can engage audiences. However at one point audience will get the feel that movie gives you 50 percent thrills. Movie takes its own time to settle, which is a major drawback. Overall movie will not disappoint you.

Immediate reaction at Intermission: Interval twist is interesting. Police comes for the girls. Let’s find out what happened in second half.

Watch or Not?: Dulquer fans can enjoy the movie. Also this movie is for who loves romantic entertainers with twists.

Box Office Status: Due to Dulquer Salman fans the movie might get openings in metros. However the run of the film depends on how other centers embrace the movie and mouth talk for the film. There are 2 other movies in competition as well.

Samantha Akkineni is one of the top actresses of the South Indian Film Industry. With dozens of blockbusters on her list, the actress has...
Read more
Movie News

Jr NTR will soon be wrapping up his portion of RRR and he is scheduled to join hands with Koratala Siva for his next...
Read more

Congress leader Rahul Gandhi has taken a sensational decision as the coronavirus is booming at a faster rate. On Sunday, through his official Twitter account,...
Read more
Political News

YS Sharmila should fight for us in AP: Amaravati farmers

Women farmers in Amaravati have asked YS Sharmila to listen to their appeals and they asked her to fight for them. Amaravati women farmers...
Read more
Political News

Corona cases are increasing day by day in the second wave. People in many states are suffering from a shortage of oxygen cylinders and...
Read more
Political News

In a shocking development, India has reported its highest-ever single-day spike of coronavirus cases more than 2.73 lakh fresh cases and over 1,600 deaths...
Read more
Movie News

Samantha Akkineni is one of the top actresses of the South Indian Film Industry. With dozens of blockbusters on her list, the actress has...
Read more
General News

TB Analysis: Wearing glasses to protect eyes is much recommended amid the second wave of covid-19

The second wave of covid-19 has increased unduly. Though Telangana government didn’t announce lockdown during this phase, supply of vaccine has came as a...
Read more
Political News

Congress leader Rahul Gandhi has taken a sensational decision as the coronavirus is booming at a faster rate. On Sunday, through his official Twitter account,...
Read more