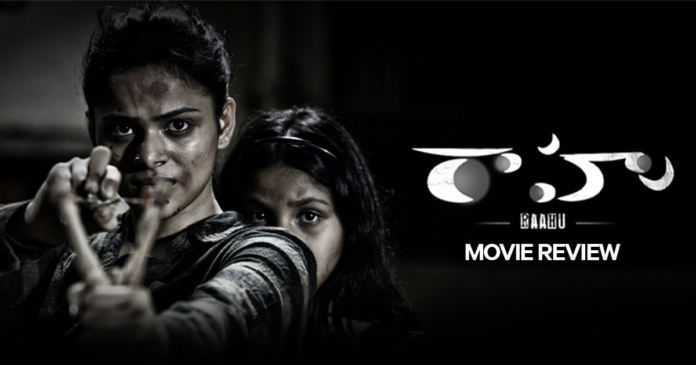 All thanks to Sid Sriram, Raahu gets decent buzz with the super hit song Emo Emo Emo sung by him. The movie which is directed by Subbu Vedula released today. Check out the review.

Bhanu (Kriti Garg) is daughter of ACP (Subbu Vedula). She falls in love with Sesh (Abhishek Varma) on her Sikkim tour. However ACP didn’t agree for marriage as their horoscopes doesn’t match. He says that they will die if they get married. However Sesh and Bhanu gets married without the acknowledgement of ACP.

One fine day, Bhanu decides to tell this to ACP but she gets kidnapped the same day. Bhanu has hysterical blindness (gets blind by seeing blood). How she gets out from this kidnap drama is rest of the story.

Kriti Garg has done a decent job on her part. Her role is crucial in second half and she has done well. Abhiram Varma needs to work on his acting skills. He needs to be better in acting. Subbu Vedula character is artificial. Kalakeya Prabhakar is Ok in regular role. Giridhar, Chalaki Chanti characters have failed to evoke laughs.

Music by Praveen Lakkaraju is the major and only plus point for the movie. Sid Sriram song Emo Emo Emo and the song which comes at the end are very good. Rerecording is fine. Director Subbu Vedula who is also one of the producers has taken an interesting point but he has failed weave an interesting story around that. Screenplay in first half is utter crap. There is no links between the scenes whatsoever. Front and back screenplay technique irritates you.

However the thread that is woven around heroine is nice. If that consistency is maintained through out it would have been a different result.

Subbu Vedula has taken interesting concept but failed to evoke interest in the audiences. The entire first half except is scrap except the interval. Post interval, director has succeeded in maintaining the suspense of murder mystery. But it will be unfair from the audience point of view to bear the film for this impressive 30 minutes. Overall Raahu is a wasted opportunity.

Immediate reaction at Intermission: Interval twist is nice but it was tough to bear the remaining first half.

Immediate reaction at end credits: Second half is better when compared to first half. Nevertheless it will be tough to digest.

Watch or Not?: No. You can easily skip the movie.

It will be very difficult for Raahu to get even the openings as almost new cast and crew were involved. Raahu has a huge competition in the form of HIT. Even there is Bheeshma which is successfully running. So we doubt if this film can actually make any impact.