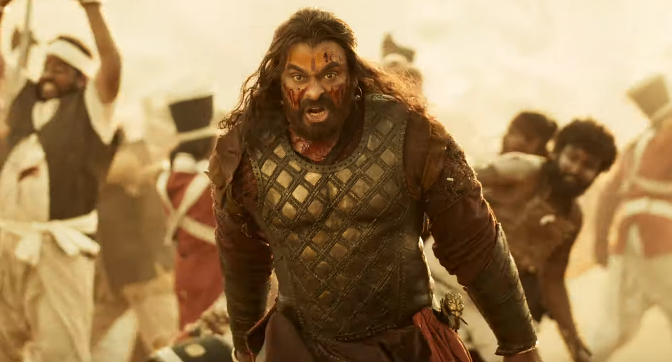 Exceeding all the expectations, Sye Raa second teaser, which has been released just-a-while, is currently waving on the internet.

As announced before, Pawan Kalyan’s voice-over has been the major attraction of the teaser. The Power Star describes Narasimha Reddy’s character and gives a terrific introduction about him. The teaser later reveals some stunning visuals, war sequences, horse ridings etc.

Sye Raa shows Narasimha Reddy as the first person to declare a war against the Britishers and throughout the teaser, Chiranjeevi’s intense action episodes and dialogue delivery cannot be ignored, even at gunpoint. The teaser clearly reveals that not only the mega fans, but the entire cinema lovers across the country are going to have a mega feast after the release of Sye Raa.

The film is scheduled for the release on October 2nd, on the occasion of Gandhi Jayanthi. Sye Raa will be released in Hindi, Tamil, Malayalam and also Kannada along with Telugu.

Especially, it is the background score along with Pawan’s voice that takes the cake in the teaser. Music director Amit Trivedi deserves all the appreciation for his contribution to Sye Raa. It seems like no one would have given such terrific BGMs for a magnum opus of this kind.