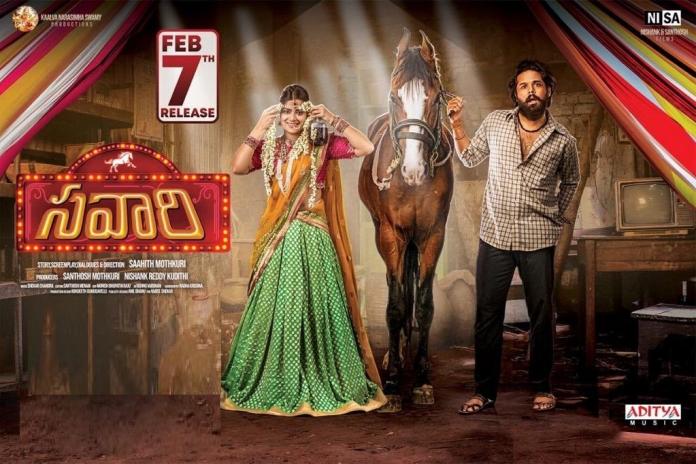 Nandu who is popular as a character artist has turned into lead actor with the movie Savaari. The film has attracted audiences with its impressive trailer and songs. Let us see if the movie lives up to its expectations.

Raju (Nandu) is happy go lucky guy who lives in slum. He has a horse with the name Baadshah who is his livelihood. He uses Baadshah as Savari in marriages. Unfortunately, Baadshah has a heart problem and for the operation, he starts saving money. But at the same time he meets Priya (Priyanka Sharma) who loves him. After few scenes he reciprocates the love. But loving Priya brings unwanted troubles to Raju. What are they? How are they connected to Baadshah? Who is Priya actually? How Nandu solves all his problems is the remaining part of the film.

Nandu has done many roles in his career but definitely his performance in Savaari stands out. He will go a notch higher in terms of performance. He has justified director’s vision completely. Irrespective of the cinema result, Nandu will be recognized as a good performer with this movie. Priyanka is just okay in her role. In some scenes she did well while in other she is not so okay. Shiva did well. Others are fine.

Cinematograhy and music stands out apart from remaining departments. Monish Bhupathiraju’s camera work is impressive. Music by Sekhar Chandra is outstanding. Every song is good to hear. However they could be shot better. Editing by Santosh could have been better. Movie is slow in pace and many unwanted scenes comes and go in the movie.

Sahith Mothkuri has handled Story, Dialogues, Screenplay and Direction departments. Apart from direction, he has failed in every other department. Story is ages old, only change is that horse has been added to give new dimension. Screenplay is routine and dialogues are not worth mentioning. His attempt in dark comedy fails too.

Savaari is one such film which is attractive by its trailer but is boring as a complete movie. Boring scenes, routine screenplay, not so interesting narration makes the movie a tedious watch. Apart from that horse backdrop there is nothing new to offer and that backdrop isn’t impressive either.

Immediate reaction at Intermission: OMG! Still we have to bear second half

Watch or Not?: Would you dare to, after reading all the warnings!

Thanks to the trailer, Savaari will get decent openings. But with the content they have in hand, it will be extremely difficult to sustain.

Movie becomes predictable through out the second half. Though some emotional scenes regarding Baadshah and Nandu worked out to some extent, rest is routine to the core. A very badly exectuted film. Stay tuned for the review

01.00 P.M: Movie finally comes to an end with hero, heroine meet each other

12.35 P.M: Baadshah stunts in the set are nice. Time for the song Savaari Jai Savaari which is shot well

12.10 P.M: Another love montage song Undipovva Nuvvila is on which is very nice.

12.05 P.M: Finally Nandu finds out his horse and takes her to his slum. Villains have no idea about it.

12.00 P.M: Second half starts with Nandu searching for his Baadshah.

Movie so far is very boring with regular scenes. Love story is routine and nothing much to say. Songs are nice. Second half will decide the fate of the movie.

11.45 A.M: Movie comes to interval with some confusion from Kali gang. They ends up kidnapping other guy thinking as Nandu and his horse Baadshah

11.32 A.M: Finally some movement in the story. Heroine’s past boy friend gives supari to Kali to kidnap Nandu

11.25 A.M: Film is moving on a dull note so far with nothing much happening. Story is yet to take off.

11.12 A.M: TNR gets introduced as Kali. He is in search of Kali, a dreaded gangster

11.08 A.M: Super Song hit of Savaari is on now which was shot in slum area. Song is good

11.00 A.M: Nandu takes the horse for Savari to heroine marriage. But as heroine doesn’t like the marriage, she escapes from the marriage On horse..

10.48 A.M: Movie opens with horse running on the roads. Horse name is Baadshah and it is narrating the story. Rahul Ramakrishna’s voice over for Baadshah

Nandu after a long time is playing the lead role in the movie Savaari. The movie has raised enough expectations with a super hit song and interesting promos. Savaari hit the screens today. Let us see how the movie is.