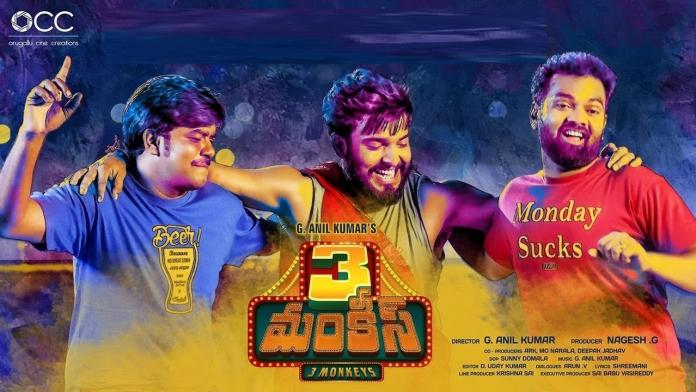 Sudigali Sudheer, Auto Ram Prasad and Getup Srinu are very popular among households with their comedy skits in popular comedy show Jabardasth. They both acted together in lead roles in the movie 3 Monkeys. The movie’s promos are decent and let us see how the movie is in the review.

Santosh (Sudigali Sudheer), Phani (Getup Srinu), Anand (Ram Prasad) are buddies since childhood. They happily lead their respective lives. Story takes a turn when Santosh gets to know about his issue in sexual life. He has erectile dysfunction. To know whether he really has that problem, the three calls upon a pimp (Karunya) to their house.

However, Karunya dies mysteriously. What happens to her? Is the death related to these three? If not, who did this? How did the three monkeys solve their problems is rest of the story.

Sudigali Sudheer has proved with this film that he can do emotional scenes well apart from comedy. He stands out among the other two lead actors. Getup Srinu is fine too. Auto Ram Prasad in his own style has entertained to some part with his punches. Karunya did a small role. Shakalaka Shankar irritates with his double meaning comedy. There is nothing much to talk about the other performances.

It is not necessary to point out one by one. Every technician in this movie competitively gave the worst output they can. We cannot figure out the winner among them.

Sudigali Sudheer and his Jabardasth team played lead roles in the movie and that itself is a crowd puller point for the film. However, director makes the movie as if he wants to torture the audience with his narration. It tests your patience. There should be appreciations for the audience who watches the whole film without any complaints. Such is the level of torture. 3 Monkeys is a utter disappointment.

Immediate reaction at Intermission: Can I bear the second half too!

Immediate reaction at end credits: What am I doing here?

Because of Sudigaali Sudheer, Auto Ram Prasad and Getup Srinu there might be some buzz among the audiences but by the time of first show it all falls flat. Thanks to the torturous direction and taking. 3 Monkeys will end up as a failure project for producers and unbearable one for the audience.

02.00 P.M: With lots of emotions and twists, turns movie finally comes to an end. Main twist comes at the time of title cards.

01.40 P.M: Movie turns into emotional mode with lead actors trying with their performances to save the movie. But the scenes are not worth it

01.25 P.M: Director has taken audience for granted. He is playing with story and screenplay and of course audience. However no scene is engaging so far. No twist is worth mentioning

01.05 P.M: Movie is going from bad to worse with horror-comedy going horribly wrong. However it ends with a twist

First half report: Except the opening block there is nothing much to say about the film. Scenes are filled with double meaning comedy. Even Jabardasth comedy is not worked out. There is absolutely no story in first half.

12.40 P.M: These 3 monkeys decide to book an aunty to confirm what doctor has said. But that aunty scene ends up with a twist. Only adult content is going on targeted purely at C centers. They are enjoying it though. Comes to interval with adult content story taking horror twist. This is very bad. Really very very bad

12.15 P.M: Sudheer, Ram Prasad and Sreenu tries to enter a pub. This scene is executed very badly with too much vulgar comedy. Basically Aayushman Khurrana’s problem in Shubh Mangal Saavdhan is applied to Sudheer’s character here. He has started an affair with his Boss’s wife but then issue gets highlighted. Shakalaka Shankar makes his entry as doctor. His double meaning dialogues are OK.

12.00 P.M: Movie turns into comic mode. But the comedy is very low. Very average start. Three heroes got introduced. Nothing impressive to say about it.

Sudagali Sudheer, Auto Ram Prasad and Getup Srinu who are very popular as a team in comedy show Jabardasth have turned heroes for the movie 3 Monkeys.