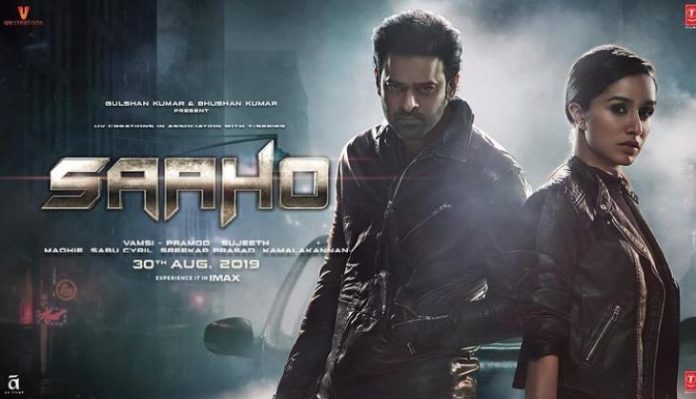 After a grand introduction of fictional Waji City and its mafia don Roy enacted by Jackie Shroff, plot moves to Mumbai city. Prabhas gets introduced as undercover cop Ashok Chakravarthy and the action sequence is convincing. Niel Nitin Mukesh plays as suspect thief in the robbery case Prabhas gets assigned to by Mumbai police department. Shraddha Kapoor plays the role of a cop Amritha, her role gets introduced as a powerful cop and later gets limited to routine heroine role. An interesting twist happens in the movie just before the interval, action sequences choreographed by Kenny Bates are racy. Director Sujith comes up with this action extravaganza and takes you through plethora of twists and turns before the interval and the final climax. Songs in the first half are okay and missing Telugu nativity. Ghibran’s background score is worth mentioning throughout the movie.

Second half of the movie moves to foreign locales. Prabhas will be seen with a different hairstyle in second half and comes out of his composed persona that he portrays in the first half; Bad boy song is worth mentioning. Jacqueline Fernandez steals the with her scintillating moves in the song. Huge action sequence shot in Dubai is captivating at times and leaves audience with adrenaline high. Plot takes turns and director’s inexperience shows up handling parallel plots and bringing them together in the second half. The rest of the story revolves around how Prabhas finds the black box which is the key to a fortune. Movie ends with a very interesting twist; climax is shot in Mad Max Fury Road movie theme.

Prabhas plays a very composed and clever undercover cop in the first half. He looks a tad bit tired but a couple of shirtless scenes with six pack leaves his female fans spell bound. Shraddha Kapoor has done a decent job in this very action-oriented narrative. Niel Nitin Mukesh and Arun Vijay performed well in important characters.

Sujeeth got a very good opportunity during very initial stages of his career. Sad he could have done a better job. Too many subplots and many characters made the movie convoluted. Story of the film is very thin and missing tight screen play. Individual scenes are okay but the flow does not exist cinematically on big screen. Cinematographer Madhie has done a good job capturing director’s vision through lens. Sreekar Prasad’s editing is lousy. Costumes are okay.

Too many twists and turns in the plot is challenging at times to keep the audience engaged. Saaho is a class action thriller which has a thin story plot and lousy editing.