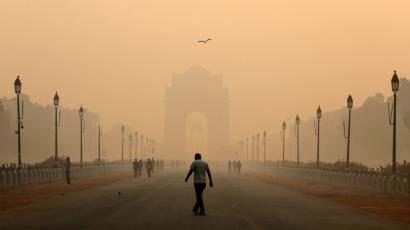 BJP leaders are constantly coming up with the statements of their own, about the heavy  air pollution in the national capital city Delhi.

While the other day, the national party leader Vidyasagar Rao has said that Hyderabad may soon become the second capital city of the country due to pollution in Delhi, now Vineet Agarwal Sharda, another leader of BJP has come up with his own statement. He blamed China and Pakistan for the pollution in the Capital City.

The Uttar Pradesh leader said that the neighboring countries- Pakistan and China, are releasing the poisonous gases in Delhi, as they are frightened about the popularity of Prime Minister Narendra Modi.

Adding to it, he also criticized Delhi Chief Minister Arvind Kejriwal, for blaming the farmers of Haryana and Punjab, who burnt their farms. Kejriwal opined that the act led to the severe fog in the national capital.

Rather than suggesting any recommendations to control the pollution, the leaders of the ruling party, making such baseless and impractical comments, will only make them fall prey for the trolls and nothing else.