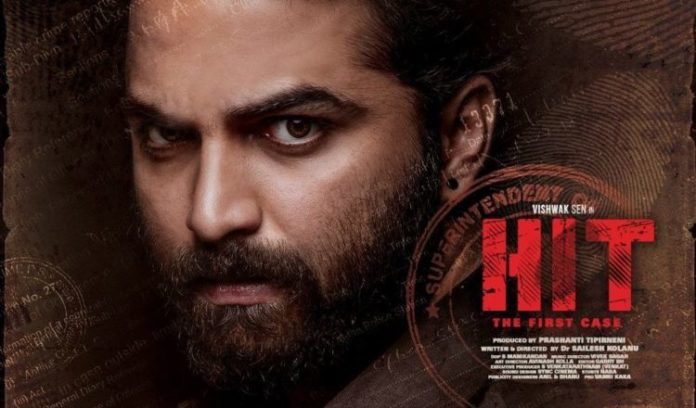 Natural Star Nani’s second production venture HIT has created enough interest among the audiences with its theatrical trailer and sneak peek. Touted to be a crime thriller, movie unit has shown immense confidence on their product. Will the hype created by the movie unit worth it. Let’s find out in the review.

Vikram Rudraraju (Vishwak Sen) is an investigative officer who is suffering from post traumatic stress. A college going girl Preethi goes missing on Outer Ring Road due to carelessness by CI (Murali Sharma). Forensic officer Neha (Ruhani Sharma) who is the girl friend of Vikram goes missing too. Officer named Abhilash doubts Vikram in the missing case of Neha. Rest of the story is all about what happened to Preethi? What is the link between her missing and Neha’s kidnap? Why Vikram is doubted? What is the story behind Vikram’s traumatic stress?

Vishwak Sen has the image of aggressive performer but in HIT, he toned down that a bit perfectly suited the role of an officer who suffers from traumatic disorder. He is believable in the role of an investigative officer. Ruhani Sharma is OK in her role. Love track between Vishwak Sen and Ruhani Sharma comes in as a nice refresher. Murali Sharma, Bhanu Chander, Brahmaji, Hariteja have done justice to their roles. However their screen times are limited.

How about off Screen Talents.?

Mani Kandan’s cinematography perfectly suited a dark crime thriller. His work will stand out in the film. Vivek Sagar’s BGM needs special mention. It is not so easy to score for a thriller but Vivek Sagar came out with flying colors. Garry BH’s editing is smooth and goes well with the flow.

Sailesh Kolanu though a new director is successful in bringing in thrills with the subject he has taken. However he fails to get the emotional connect right which is very important for every movie. Though the investigation process is impressive, reason for the main crime which is heart of the movie fails to give right impression. Post traumatic attacks comes in as a deviation which doesn’t go well with the audiences. Production values by Nani and Prashanti Tipirneni are superb.

HIT is a thriller which has its moments. The movie starts off in an interesting note. In fact the entire first half is dealt in an interesting manner. Post Interval, first 20 minutes of second half is impressive too. But after that the film creates dragged feel. Unnecessary deviations from the story bogs down the feel that movie has carried up to that point. However Climax is OK and the lead to second part is fine too. Reason behind the crime is not that convincing. Overall HIT has its own problems but it is not a movie that can be ruled off completely.

Immediate reaction at end credits:
Weak climax, could be a better justification for the crimes. Even though it has all the good elements of a crime thriller it lacks a convincing point that brings it all together. Feels a bit dragged for 15 mins in mid second half.

Watch or Not?
Yes, if you are game for thrillers. Otherwise you can wait for OTT release.

Box Office Status:
HIT is releasing in off season. 6 Crs is the target for the movie. On the other hand, there is another movie which is running with hit talk. So it is not so easy road ahead for HIT. However we have to wait and see how thriller genre lovers will embrace the film.

After being off tracked for over 15 minutes in second half, the movie finally gets on track before pre climax but ends with a weak climax . Finally Hit is a passable thriller which has its high and low moments. Wait for our review, which will be out in a while.

06:50 AM: Movie comes to an end with an interesting lead to second part

06:40 AM: Climax is all about the man behind Preeti’s missing and how it is connected to Neha’s kidnap

06:35 AM: After feeling a bit dragged for 15 minutes is second half, the film picks up the pace again

06:30 AM: After investigating deeply, Vikram finally finds out the real culprit

06:15 AM:  Scenes are a bit dragged now with more investigation scenes are coming on. Length of the movie is very important for these kind of thrillers

06:05 AM: Usual thriller plot continues in the film. Looks like a breakthrough, but is a dead end

05:55 AM: Vikram gets breakthrough in the case. He arrests a person who is close to Preeti

05:45 AM: First half Report: Lots of moving parts in the first half, very tight screenplay. Vishwak Sen acts with ease. Movie has all the elements of a good crime thriller. We have to wait and see how second half unfolds.

05:40 AM: Chase and fight sequence in old city is riveting. It is well shot and BGM is apt. Interval Time..

05:35 AM: Vikram continues to get panic attacks as the investigation progresses

05:30 AM: 50 minutes into the movie, HIT has been interesting so far. Screenplay is tight as Vikram is investigating Preeti’s case.

05:20 AM: Vikram Rudraraju starts his own investigation over these missing cases.

05:15 AM: Neha (Ruhani Sharma) who works in forensic department also goes missing. Another officer Abhilash who is investigating the case suspects Vikram.

05:10 AM:  A 20 year girl Preethi gets missing on ORR. CI Manoj Sharma who begins investigation gets suspended due to his carelessness

05:00 AM: Vikram chases down a mystery case. He is an investigative officer. Movie is impressive so far.

04:55 AM: Sneak Peek that was released is essentially the first 5 minutes of the movie which is very interesting.

04:50 AM: Vikram loses someone close to him and is suffering from post traumatic stress. He is a police officer and hides this from department.

04:45 AM: Movie starts with Vikram Rudraraju (Vishwak Sen) getting panic attacks due to post traumatic stress

04:40 AM: Vishwak Sean, Ruhani Sharma starrer HIT which was produced by Nani with ‘U/A’ certificate and run time of 126 minutes has just started.

Vishwak Sen after gaining more craze with Falaknuma Das is playing lead role in the movie HIT. This investigative thriller is all about finding a missing girl. How the team HIT chases the kidnap drama. It is said that movie is filled with many edge of the seat moments. All the team members of HIT have expressed extreme confidence on the movie.

Made on a decent budget, the movie needs to collect 6 Crs world wide to become a profitable venture. HIT is releasing in a decent number of theaters. However Bheeshma running successfully and off season release are going to work against the movie. We have to see how Vishwak Sen grabs the audience attention.

Telugu Bulletin is coming forward with the first on net exclusive live updates on the film. Review will follow up soon. Catch this page for more updates.

Megastar Chiranjeevi showed why he is a class act with his thoughtful and genuine gesture towards veteran Telugu actor Kaikala Satyanarayana. Satyanarayana is celebrating his...
Read more
Movie News

The ruling party of Andhra Pradesh YSRCP has swept the Eluru corporation elections by winning a total of 47 out of the total 50...
Read more
Movie News

The ruling party of Andhra Pradesh YSRCP has swept the Eluru corporation elections by winning a total of 47 out of the total 50...
Read more
Political News

KCR: No need to care about Eatala Rajender

Mahbubabad MP Malothu Kavitha has been sentenced to six months of jail time by the Court of Public Representatives for distributing money to voters...
Read more
Political News

RRR: Why did they give me a ticket after knowing everything?

Megastar Chiranjeevi showed why he is a class act with his thoughtful and genuine gesture towards veteran Telugu actor Kaikala Satyanarayana. Satyanarayana is celebrating his...
Read more
Movie News

The ruling party of Andhra Pradesh YSRCP has swept the Eluru corporation elections by winning a total of 47 out of the total 50...
Read more
Movie News