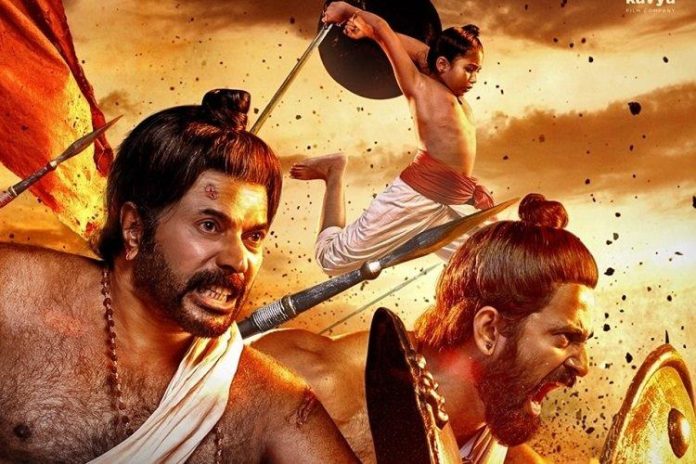 After a few years, Unni Mukundan along with a 15 year old boy goes on a similar operation. Mammootty extends his support to the duo. What are the consequences Unni and kid faced and how did Mammooty face Samudris is what forms the crux of Mamangam.

Mammootty has once again come up with a brilliant performance throughout. His acting skills elevate several dull scenes in the film. Unni Mukundan gets a full length roleand he nailed his performance. Even rest other actors are decent in the roles they are offered.

M Jayachandran’s music, especially the background score is good. His BGMs elevated a few key scenes in the film. The cinematography is another notable point in Mamangam. It is apt to the mood of the film. On the technical side, only music and the cinematography  deserves a sure mention. Rest other departments just did an average job.

Not to indulge in fights and kill people for castes or religions is what the makers intended to tell through Mamangam. As the point is already done and dusted in several old films, it fails to appear to the new generation audience.

Telugubulletin.com is going with a 1.5 rating for Mamangam only due to three elements- actors performances, music and cinematography. Nothing is either exciting or interesting in the film. The age old story and adding to it, a boring treatment makes Mamangam appear to nobody. It literally tests the patience of the audience watching the film in theatre.

As expected, even second half has nothing much to offer. Unni Mukundan and his son-in-law moves to kill Samudri warriors. The consequences they faced in the attempt have been explained in this part of the film. Nothing is truly impressive.

11.50 AM: Movie ends with a huge fight between Chaveri and Samudhri warriors.

11.30 AM: Finally Mammootty, Unni Mukundan and his son-in-law going to kill Samudhri.

11.20 AM: A fight between Mammootty and Tarun Arora.

11.15 AM: A classical song with Prachi Tehlan and Iniya to divert Samudhri warriors and help Unni Mukundan and his son-in-law to escape.

11.10 AM: Unni mukundan finds the back story of Mammootty.

11.00 AM: A snake bites Unni Mukundan. He along with his son-in-law meets Mammootty for the treatment.

Except an introduction fight of Mammootty, nothing seems worked out with the film. As of now, there is no proper clarity about a single character in the film. Even the screenplay is twisted and is utter confusing. The complete first half has been filled with a thorough boring scenes. No great enthusiasm for the second half.

10.42 AM: With a clueless behind story of Mammooty and huge confused screenplay, the movie takes interval.

10.30 AM: A classical song is going on with Mammootty

10.23 AM: Mammootty’s flashback is being narrated with a good background score.

10.10 AM: A rich guy gets killed in Samudhri group. Everyone is in search of the killer.

09:56 AM: Unni Mukundan introduced as Chandroth Panicker. He is a warrior from Chaveri. According to the story, the war is between Chaveri and Samudhri groups.

09:36 AM: Mammootty introduced in an unexpected manner. It leads to a huge fight sequence.

09:29 AM: Movie started. A voice narrating the meaning of Mamangam. It is a festival with animated arts.