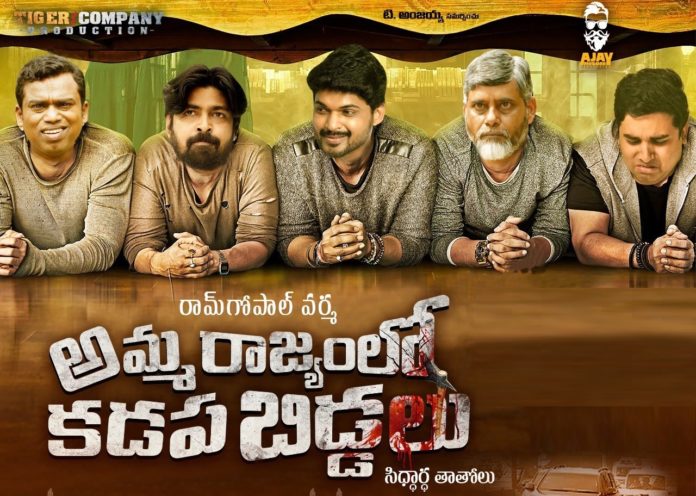 Needless to say Amma Rajyamlo Kadapa Biddalu is based on Andhra Pradesh politics and politicians. VS Jagannatha Reddy (Azmal Amir) rises to power by defeating Velugu Desham Party. But public loses confidence in the new government and the requirement for interim elections arise. In this backdrop, opposition party leader Devineni Rama gets murdered on Vijayawada’s main road. The consequences of this murder form the remaining story of Amma Rajyamlo Kadapa Biddalu.

Azmal Amir is decent in his role as Chief Minister. Even rest other new actors justified to their roles.

RGV adopted several real life scenes in the film. Adding to it, picking the characters resembling the real life characters is another major advantage of Amma Rajyamlo Kadapa Biddalu that made audiences rush to the theaters on the first day. Pappu song and Devineni Rama’s murder are the major highlights of the first half. KA Chal’s role in the second half evokes good laughs in two to three scenes. Except the above mentioned areas, the rest of the film is a pure dud.

Jagadeesh’s cinematography is decent and background score is also good in parts. Though the film is a spoof, it is neither dealt in a comic way nor serious way. RGV only tried to project the real life scenes with the duplicate characters. He tried to portray the ruling party leader as honest by giving him a clean chit in all the cases against him.

While the story lacks any strength, the boring screenplay further tests the patience. Siddharth Thatholu’s direction is average and editing is a total failure.

Amma Rajyamlo Kadapa Biddalu ends with RGV’s interview. Speaking in the interview, he says, “be it movies, politics, TVs, games and any other, public only needs entertainment and nothing else.”

RGV could have at least stick to his logic and must have thought about entertainment in Amma Rajyamlo Kadapa Biddalu too. The film lacks any entertainment and it is a thorough dud with some stupid screenplay and mindless story.

The curiosity raised with an interesting interval bang gets killed just within few minutes after the start of the second half of Amma Rajyamlo Kadapa Biddalu. There is no proper screenplay. RGV’s way of answering in interviews has been highlighted and the film ends with the same interview. Except that scene, there is nothing more to expect in the rest of the second half.

12:20 PM: Done with interim elections, the movie ends on a funny note with Jafer interview.

12.05 PM: As of now, the second half appears trash. Worst screenplay ever.

11.55 AM: Sudden twist in the tale. VS Jagannatha Reddy’s party takes a never before decision.

11.45 AM: Jafer interview with PP Chal is hilarious.

11.38 AM: Brahmanandam character elevation is being developed under good suspense.

11.32 AM: It’s time for RGV’s ‘chempa meeda kodite ..champestadu ‘ song. It is used as a BGM for political parties war scenes.

11.27 AM: A satire on RGV’s controversial tweets is just okay.

11.24 AM: SIT team formed to investigate about murders. Anchor Swapna enters the scene as lady Chief.

11.15 AM: Second half started. The ruling party leaders are killing VDP supporters in Vijayawada. The murder scenes are happening with the background song ‘Khabaddar’.

Amma Rajyamlo Kadapa Biddalu is a replica of the ongoing political issues of Andhra Pradesh. The movie starts with the election campaigning of political parties and takes on to the election victory, assembly meetings, press meetings and so on which are completely inspired from the real life.

Pappu song is hilarious to watch on the screen. The actor who played China Babu’s role evokes good laughs with his expressions. Velugu Desam Party’s MLA Rama’s murder gives a good high to the entire first half and takes to the interval.

11.00 AM: Velugu Desham Party’s MLA Rama has been murdered on main road. The scene gives a good high after a few slow pace scenes. Time for interval

10.55 AM: Ruling party leaders are trying to get Capital City to Vijayawada.

10.42 AM: Velugu Desam Chief planning to bring Jagannatha Reddy down from the CM’s seat.

10.22 AM: CM Jagannatha Reddy’s sweet warning to his MLAs asking them not to create any ruckus in Vijayawada.

10.18 AM: Velugu Desham Party leaders go against the party chief as he is supporting his son Chinababu.

10.15 AM: Jagan’s CM ceremony visuals and voice are used in the film’s ceremony scene.

10.13 AM: After elections VS Jagannadha Reddy’s CM oath ceremony is taking place and on other side Velugu Desham Party head and son are crying.

10.10 AM: On a note of before elections, movie begins with Manasena party yuvaneta campaigning.

10:07 AM: RGV dedicated the film to all politicians. It’s a special card.

Rana Daggubati one of the most eligible bachelors in Telugu film industry is going to tie knot very soon. He has recently revealed that...
Read more
General News

COVID-19 pandemic has started to spread its wings in India and most importantly the cities are worst affected in the sub-continent. All big cities...
Read more