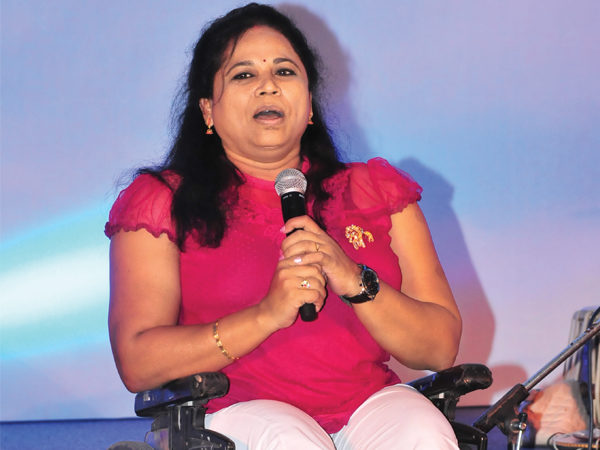 Malathi Krishnamurthy, a disabled woman has won several challenges, life had given her. She had to face polio in her childhood itself, where her whole body was paralyzed.

Malathi has undergone over 30 surgeries for broken bones in her legs, and also electric shock therapy for 2 years, which made her regain strength in her upper body, while the body below the waist, wasted away.

But that couldn’t stop her from achieving big in life. In several national and international events, Malathi has won 389 golds, 27 silvers and 5 bronzes. She is identified as the fastest female Indian athlete on a wheelchair.

Malathi has got an enormous support from her father who encouraged her to be confident and independent. She is much interested in wheelchair sports and made sure that she is physically fit for it.

Speaking in an interview, she said, “I don’t think I am a disabled person. Of course, I am disabled physically. But that is just one part of my body. My self-confidence is not paralyzed”.

During her college days in Bengaluru, Malathi took initiative in moving her classrooms from upper floor to the ground floor. In 1988, Malathi was selected to represent India at Paralympic Games for the first time.

Since then, she represented the country at the Paralympic Games in Barcelona, Athens and Beijing; and the Asian Games in Beijing, Bangkok, South Korea and Kuala Lumpur. Not only sports, she is also a manager at Syndicate bank. Malathi believes that the real disability of a person could be an inferiority complex. If one could overcome it, nothing is impossible.

Malathi is the first disabled person to receive Padma Shri Award. She is also the holder of Arjuna Award, for which she campaigned that it should be given to disabled athletes too. Apart from it, Malathi runs a home for disabled children in the name of Mathru Foundation. In 1995, the Karnataka government granted her with the prestigious KK Birla and Eklavya Awards. American Biographical Institute, USA, also identified her as Woman of the Year, 1999. In the same year, she was also named as International Woman of the Year by International Biographical Centre, Cambridge, UK.

In 2009, she even came up with her biography, and on the release day, she said, “I took up sports and decided to do something different in life. Yes, we are different and so even our lives should be a shining example of that difference.”

South sizzling beauty Nivetha Pethuraj, who has recently starred in Allu Arjun starrer Ala Vaikunthapurramloo, has stealed the spotlight with her latest Instagram photos....
Read more