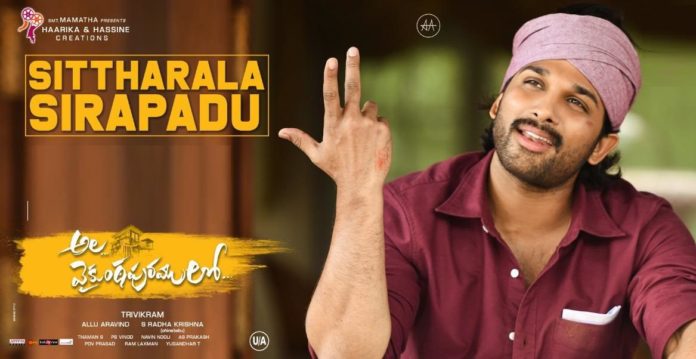 Stylish Star Allu Arjun’s Ala Vaikunthapuramulo has been one of the biggest hits in the history of Tollywood. The film is still going strong and is going to create more records in the process. The film is all set to cross 100 Cr share very soon.

One of the main highlights of the movie is the song Sittarala Sirapadu which came as a surprise to the moviegoers. Trivikram Srinivas kept it under wraps and has not revealed about the song anywhere before the release. Sittarala Sirapadu visually matching the fights is one of the best composed fight in TFI in recent times.

This song and the fight took the film to another level. Now on public demand, makers have released the lyrical video of the song. Written by Vijay Kumar Bhalla, the song is sung by Sooranna and Saketh Komanduri. Thaman SS composition is simple and neat. Sooranna’s voice is unique and magical. Vijay Kumar Bhalla’s lyrics catch up with the audience immediately. Ram-Laxman masters choreography for the song suits up well.