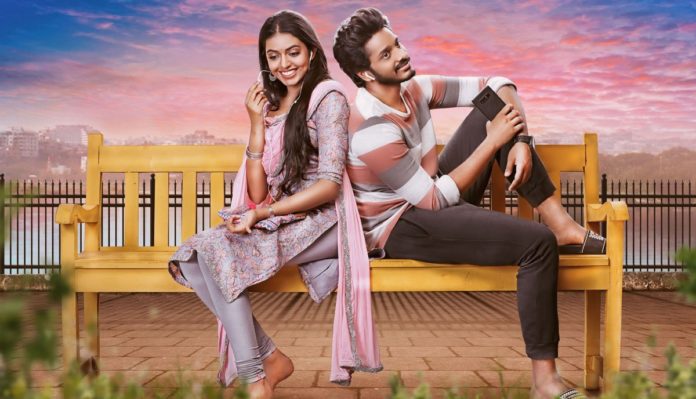 Adbhutham, starring Teja Sajja and Shivani Rajasekhar in the lead roles had a direct to digital release on Disney Plus Hotstar today. Let’s see how it fares.

Disappointed with the things happening, a guy named Suriya (Teja Sajja) decide to end his life by committing suicide. Before dying, Suriya texts a message from his phone to his own number but it will be delivered to a girl named Vennela( Shivani), who is also about to commit suicide. Later, words exchange between them and eventually both become good phone friends. When they decide to meet each other, as a twist, both realise that they are in different times periods. How will the two people in different times zones meet each other? Forms the main USB of the film.

Teja Sajja is cool in his boy-next-door character. His styling and screen presence is an added advantage for the film. Performance-wise, Teja did a decent job and portrayed multiple emotions quite convincingly.

Looks-wise heroine Shivani Rajasekhar is okay but gave a sensible performance in her role. Her screen presence is also good. But the chemistry between Teja and Shivani is not showcased in a proper manner.

Senior actress Tulasi and comedian Satya are okay in their respective roles.

Music by Radhan is okay but would have been even better. The cinematography by Vidyasagar Chinta is alright as he captured the film in a decent manner.

Editing by Garry Bh is adequate. Production values for this limited-budget movie are fine.

Coming to the film director Malik Ram, though his core concept is good and has scope to explore in an effective manner, his narrative part lacks gripping aspects. If he would have worked on the screenplay version, the result would have been surely better.

Verdict: In an overview, Adbhutam has an okayish concept but lack of depth in the proceedings makes it a dull sci-fi oriented love drama. The film stutters due to the incoherent and drabby screenplay. It makes for an underwhelming watch.

Telangana Chief Minister, and TRS chief KCR has faced several losses in the past few months, and the general consensus, according to KCR's surveys,...
Read more
Political News

Veteran Congress leader Konijeti Rosaiah, who held various positions in United Andhra Pradesh including that of Chief Minister, has passed away this morning due...
Read more
Political News

AP employees to get a closure soon?

Andhra Pradesh government employees have been requesting the AP government to settle their pending salaries, pensions and other benefits they're entitled to, for several...
Read more