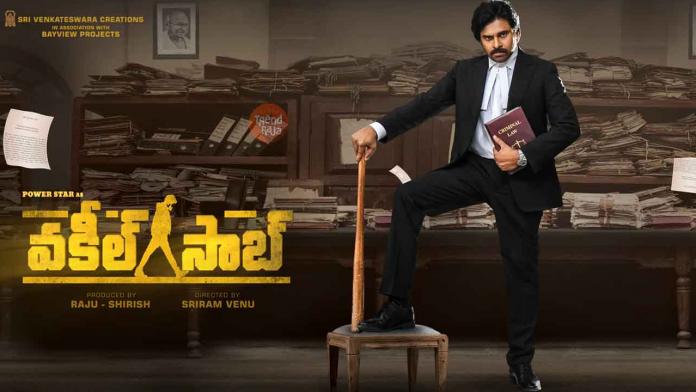 Pawan Kalyan is set to enthral his fans and followers after three long years as his latest film Vakeel Saab is hitting the big screens across the globe today. The Venu Sriram directorial is a remake of Bollywood super hit Pink. Let us see what the film has in store.

Satya Dev(Pawan Kalyan) is a socially responsible citizen who becomes a lawyer to help the needy. He marries the love of his life Shruti Hassan and following a series of unfortunate events, he quits his career. A few years later, he meets Anjali, Ananya Nagalla and Nivetha Thomas who are being harassed by a gang of goons and decides to help them. But he will have to come up against defence lawyer Prakash Raj and a crooked politician if he is to ensure that the three women are served justice. Will he be able to do so?

Pawan Kalyan’s screen presence is next to none and we get to enjoy the same in Vakeel Saab. He sports three different get-ups in the film and this comes as a sweet surprise to the viewers. His performance and portrayal of a challenging character are impeccable. He excels in emotional scenes, college episode, and courtroom scenes. Nivetha Thomas, Anjali, and Ananya breathe life into the characters they played. Nivetha’s performance in the female version of Maguva Maguva is praiseworthy. Prakash Raj as antagonist delivers a fine performance. But somewhere down the line, one might feel that Pawan Kalyan’s performance overshadows Prakash Raj’s.

Thaman delivers one of his career-best works for Vakeel Saab. The songs he had scored are already a big hit, but after watching the film, we simply can’t keep ourselves from drooling over his background score. PS Vinod’s cinematography is all things sublime. He presents Pawan Kalyan very well. The interval fight and washroom fight are the pick of the lot when it comes to action blocks.

Venu Sriram finds the perfect balance between Pink’s intricate story and the commercial standards that are quintessential for a Pawan Kalyan starrer. The changes he made to the origin story are impressive. The second half is pacy and it keeps the viewers on the edge of their seats. Pawan Kalyan’s channels the inner actor in him for Vakeel Saab. Pawan Kalyan’s political ideologies are brilliantly infused in certain scenes. The interval episode has a political touch and in a way, it can be considered as a counter to YS Jagan.

Pawan Kalyan’s fans have been waiting for three years to watch their beloved actor on the big screens and they couldn’t have asked for a better film than Vakeel Saab. The social drama showcases a new side of Pawan Kalyan as an actor he also entertains his fans with his vintage mannerisms and body language. The film has enough commercial elements to please the masses and at the same time, it has the emotional connect which bring it close to the family audiences. There are quite a few satirical dialogues as well. In certain aspects, Vakeel Saab is better than the original.

3:20 PM EST : Thaman background is fantastic so far. Pawan Kalyan introduction in a fight for a cause, good one but not PK mark fight. PK moves into the same community where Anjali and co lives.

3:35 PM EST :So far movie is staying true to its original except for PK scenes. Nivetha gets kidnapped in a car and gets molested. FIR gets filed against Nivetha (A1) and Anjali (A2). Anjali gets a non bailable warrant, Ananya convinces Anjali to consult PK for legal help.

3:45 PM EST : PK second look SatyaDev as student, gets into a fight with police. He gets arrested and put in jail, makes a decision to become a lawyer to help poor. Good action sequences that fans will enjoy. Few good dialogues from SatyaDev “Avesham tho chesthe okadike nyayam cheyagalanu , aalochanatho chesthe endhariko sahayapadagalanu”

4:00 PM EST : SruthiHasan proposes PK and gets married. Engaging flashback episode, director nicely blended into movie. PK fights for poor in court, he hits a rowdy and gets suspended by bar council.

4:15 PM EST : Anjali convinces PK to take up the case. She uses the same words that made PK choose to become lawyer. PK goes to MP  and says that he is taking up the case. Interval bang.

5:15 PM EST : Are you a virgin scene is good. Prakash Raj tries to instigate Pawan Kalyan. Judge refers them to bar council, PK gets away with a final warning.

Powerstar Pawan Kalyan has tested positive for the novel coronavirus. The Janasena Party has released an official statement regarding the same confirming the actor...
Read more
Movie News

Popular Tamil actor Vivek has been hospitalised after complaining of chest pain on April 16, Friday. He has been admitted to the intensive care...
Read more
Movie Reviews

At a time when all the mainstream Telugu movies are being postponed due to the second wave of Covid, controversial filmmaker Ram Gopal Varma...
Read more
Movie News

Earlier there was a buzz that Kartik Aaryan gave a genuine reason of the Covid 19 pandemic to not begin the shoot for his...
Read more
Movie News

Mythri making Prabhas’ next on a massive budget

Earlier there were reports that Mythri Movie Makers paid a massive advance for Prabhas, but the film did not materialize because of various reasons....
Read more

The state of roads in Andhra Pradesh is terrible, with the roads half broken and in a haphazard manner everywhere. New roads haven't been...
Read more
Political News

Amul milk which started as a small cooperative is now the number one brand in the country. Aland Varghese Kurien's hard work and rural...
Read more
Political News

Public interest litigation (PIL) was filed in the Supreme Court seeking to give the Covid-19 vaccine to all those above 18 years of age....
Read more
Political News

The state of roads in Andhra Pradesh is terrible, with the roads half broken and in a haphazard manner everywhere. New roads haven't been...
Read more
Political News

Amul milk which started as a small cooperative is now the number one brand in the country. Aland Varghese Kurien's hard work and rural...
Read more
Political News

Public interest litigation (PIL) was filed in the Supreme Court seeking to give the Covid-19 vaccine to all those above 18 years of age....
Read more
Movie News

Powerstar Pawan Kalyan has tested positive for the novel coronavirus. The Janasena Party has released an official statement regarding the same confirming the actor...
Read more