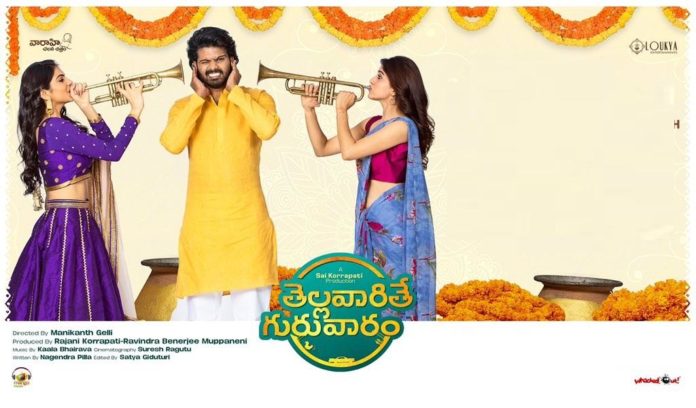 Sri Simha scored a big hit with his debut film Mathu Vadalara. His second film Thellavarithe Guruvaram is billed to be a rom-com and it hit the big screens today. Let us what the film has to offer.

Story: Veerendra(Simha) and Madhu( Misha Narang) try to escape on the night of their marriage for their own personal reasons. But they are obstructed. The duo then start opening up about the reason behind their hesitance to get married. Veerendra still has feeling for his ex-girlfriend Krishnaveni(Chitra Sukhna). The rest of the story unveils the track between these three individuals.

Sri Simha has improved as an actor. He performs well in love scenes and comedy sequences. Chitra Sukhla gets a brief role and she is decent. Misha Narang is debuting with this film and she is in her elements. Satya provides some comical relief with brilliant timing. The rest of the star cast includes Rajeev Kanakala, Ajay, and Saranya who deliver good performances.

The cinematographer Suresh is a good find. His lighting and framing set the right mood for the love drama. Kala Bhairava’s music is kind of decent but it is not of his usual best quality. Editing is poor as many scenes look stretched out and bland.

Debut director Manikanth Gelli tries to narrate a triangular love story with situational comedy. The first half is a bumpy ride with a couple of engaging scenes and a few more boring sequences. The second half is undercooked and it simply doesn’t have anything going its way. The love track is illogical and lacks novelty. Unnecessary subplots take the centre stage in second half. The director picks a routine story and his approach is even more outdated.

Verdict: Thellavarithe Guruvaram is promoted as a breezy rom-com but it is anything but that. The triangular love story is least bit engaging. It tests the patience of the audience for most parts. The young team wasted a good opportunity.

Watch or Not: You can comfortably give it a skip.

Thellavarithe Guruvaram is a romantic comedy film written by Nagendra Pilla and directed by Manikanth Gelli and jointly produced by Rajani Korrapati and Ravindra Benerjee Muppaneni under the banners of Vaaraahi Chalana Chitram and Loukya Entertainments. The film features Sri Simha, Chitra Shukla and Misha Narang in the lead roles.

Second half report: Except for a few one-liners of Satya, nothing works in the 2nd half. The film lacks an emotional angle.

10.35 A.M: Finally, Simha and Misha get connected, and they are back to their wedding.

10.00 A.M: The Second half starts with a bang, and it gives us some laughs

First-half report: The movie starts on a funny note. The flashback episodes have some boring moments and the fate of the film depends on 2nd half.

09.50 A.M: Finally, Simha and Misha escape from their Wedding. And, it’s time for the interval.

09.30 A.M: The movie is going with some dull moments, and the second song is shot well

09.15 A.M: Chitra sukhla fell for Simha and the first song picturization is good.

09.10 A.M: Simha opens up about his flashback and Chitra Shukla is introduced as the former’s love interest.

09.00 A.M: Both Sri Simha and Misha Narang are not interested in their marriage and trying to escape from the wedding. Satya’s comic scenes are giving us some laughs.