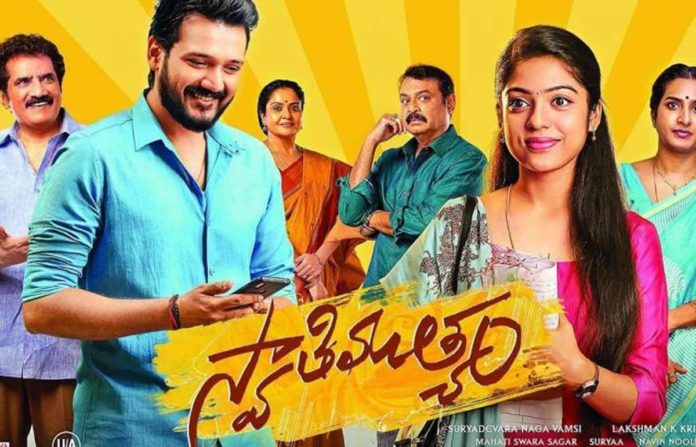 The debut film of Bellamkonda Srinivas’s brother, and Bellamkonda Suresh’s second son, Bellamkonda Ganesh, Swathimuthyam, has finally been released. Here’s how the film has fared.

Swathimuthyam is about Bala, a very simple and disciplined guy, who falls in love with Bhgya (Bhagya Lakshmi), when they meet during their pellichoopulu. They then get to know each other, but on their wedding day, everyone gets to know a secret about Bala’s past, which cancels the wedding. What is that secret, and what will finally happen forms the rest of the story.

There were decent expectations surrounding Bellamkonda Ganesh’s performance, and even though the actor has given his best, it looked like he still fell short during many key moments in the film.

Varsha Bollamma is quite good in her role and blends perfectly. Divya Sripada is perfect in her role as well, and so are Vennela Kishore and Harshavardhan.

The supporting cast, led by Naresh and Rao Ramesh, are the stars of the show, stealing every scene they are in. They are perfectly aided by Surekha Vani and Pragathi, respectively, which further elevates the scenes. The scenes featuring Subbaraju and Sivannarayana in the second half are especially entertaining, and their performances are amazing as well.

Director Lakshman has come up with a bold concept, but the director has approached it in a very family friendly way. Certain scenes between the leads have been written well, and the comedy has been handled very well in the film. The comedy in Swathimuthyam is one of the cleanest comedy that has been seen in Telugu cinema in recent times, for sure. However, the film lacked any proper emotional depth, and could have better tackled it subject.

The cinematography and the production design of the film are very good, which shows that the producers didn’t back down on investing in the film.

Verdict: On the whole, Swathimuthyam is not an extraordinary entertainer but entertains well in pieces. While the comedy in the film will appeal to audiences, the lack of emotional depth to the film is a minus for the film.

Previous article
GodFather: Boss Is Back trending on Twitter
Next article
‘Civil Engineer’ Teaser Out Now