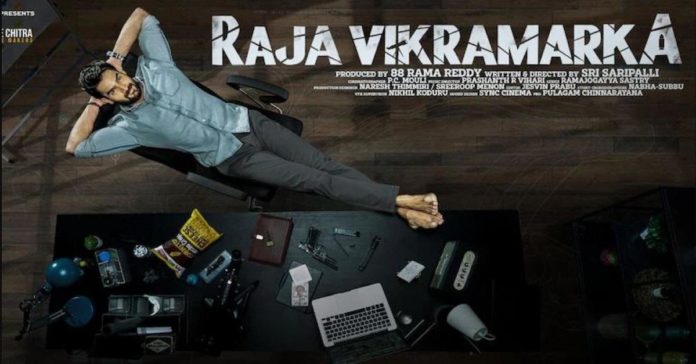 Karthikeya does cent percent justice to his role. His body language and mannerisms suit the essence of the character he plays. His commendable portrayal is one of the very few positives of this otherwise insipid thriller.

Tanya Ravichandran plays the female lead and she is just okayish. Tanikella Bharani plays an important role and he delivers what is expected of him. Sudhakar Komakula bags a meaty role and he does a decent job with his fine act. Saikumar as Home minister and Harsha Vardhan as Insurance agent/Dance master are decent

Sri Saripalli makes his directorial debut with Faja Vikramarka and sadly for him, he stutters big time. The storyline is messy and silly. The logics are left to the air and the unnecessary urge to load the screenplay with twists doesn’t help the cause either.

The background score is kind of decent and so is the cinematography. With a fundamentally flawed narrative, the technical aspects amount for very little. Editing should have been better. Production values are fine.

Verdict: Raja Vikramarka is a silly action thriller that has very few things going its way. The narrative takes a bit too many senseless twists that doesn’t help the cause. Karthikeya’s performance is possibly the only bright aspect of this shabby actioner.

06.05 A.M: Movie ends with hero saving heroine from kidnappers.. Watch out this space for detailed review in some time

05.55 A.M: Movie heading to climax.. exchange of heroine for money to kidnappers scene going on

First Half Report: Below average first half in every aspect of the film.. good performance by Karthikeya

04.55 A.M IST: Heroine gets abducted in her dance program..interval time.. It’s a Below Average First Half

04.40 A.M IST: Police officer sudhakar (life is beautiful guy) and hero works together for the mission to save Home Minister

04.10 A.M IST: Hero goes to Home Minister’s house as a dance assistant to the master who teaches dance to heroine. A secret mission to save HM

03.55 A.M IST: Entry of Sai Kumar as a home minister..and protecting him from Kidnappers is a hero and teams mission.

03.40 A.M IST: Movie opens with hero Kartikeya and 3 other NIA colleagues..Tanikella Bharani is the head of this NIA batch.. Hero and team catches and kills an anti-social element accidentally