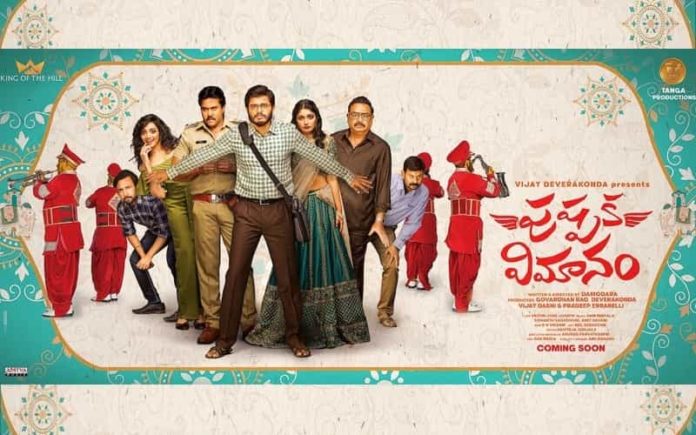 Vijay Deverakonda and Anand Deverakonda aggressively promoted Pushpaka Vimanam which has the latter in the lead role. The film hit the marquee today and let’s see what it has to offer.

Story: Sundar(Anand Deverakonda) has to come up against a strangely unusual situation after his wife (Geeth Saini) elopes with someone else soon after their marriage. What is the story behind the elopement? Can Sundar track the whereabouts of his wife?

Anand Deverakonda looks settled in a seemingly complex role. The way he portrays a troubled lad who tries to cover up the fact that his wife has eloped is impressive. This is one of his better performances. Geeth Saini looks natural and she does well. Saanve as the fake wife comes up with an impressive performance as well. She looks good and emotes equally well. Harshavarshan bags a meaty role and he comes up with a very good performance as well.

The director Damodara narrates the first half on a comical note and takes more of a serious approach for the second half. The opening half has a few bright moments, thanks to the situational comedy. But the rather timid second half, which doesn’t carry any momentum fails to keep the viewers hooked. There is a lot of lag in the latter half as the emotionally driven narrative takes the centre stage. The scenes pertaining to the male lead tracing his eloped wife are not compelling enough. They lack vigour.

The background score is good. All the songs are situational and there is nothing much to speak about them. The cinematography is good. The second half needed more trimming in order to make for a more engaging watch.

Verdict: Pushpaka Vimanam is a middling comedy drama with a breezy opening half and a dragged second half. The film has a few bright moments here and there but the penultimate scenes related to the elopement are not presented in a convincing manner.

Pushpaka Vimanam is a romantic comedy entertainer movie directed by Damodara.Produced by Govardhana Rao Devarakonda, Vijay Mattapally and Pradeep Errabelli under the banner of King of the Hill ‘Production & Tonga Productions. The film stars Anand Devarakonda , Geet Saini, Shanvi Meghna as the hero and heroines.

Watch this Space for the Exclusive US Premier Show Live updates

06.35 A.M IST: Story is inching towards climax as the murderer gets revealed.

06.25 A.M IST: Sundar escapes from police and tries to find the murderer of his wife.

05.55 A.M IST: Movie goes on a slow pace as Sundar tells the story of what happened after his marriage

05.25 A.M IST: Sundar finds out that his wife Meenakshi is murdered. Case investigation officer is Sunil

04.50 A.M IST: Sundar’s ( Anand ) wife leaves him and moves on with her boyfriend with in 10 days of marriage. Anand tries to make-believe people around him that his wife is still with him.