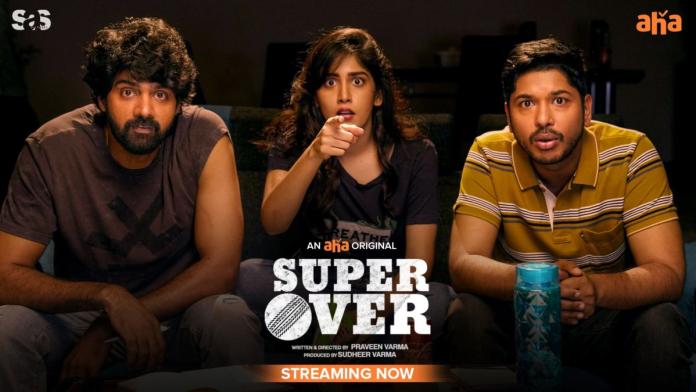 Naveen Chandra and Chandini Chowdary who have become familiar faces for OTT audiences with Bhanumathi Ramakrishna and Colour Photo respectively have come together for Super Over. The film’s director, Praveen Varma sadly passed away midway through the filming process and the direction team shot the remaining portion. Here is our review of the suspense thriller.

Kaasi(Naveen Chandra), Vasu(Rakendu Mouli), and Madhu (Chandini) are good friends. Kaasi plans to earn easy money through cricket betting and manages to do so big time as he wins Rs 1.70 crores on MPL gambling platform. Kaasi, along with Vasu and Madhu tries to recieve the money through laundering and this lands them in big trouble. The incidents that unfold later in the eventful night form the remaining plot of the film.

Naveen Chandra is seen as a greedy young man with a troubled past. He emotes well and suits the role perfectly. Chandini Chowdary as a positive minded girl with troublesome friends does a decent job. Mouli plays a worried man who always looks at the negative side of things and he does a fine job. Praveen and Ajay play supporting roles and they deliver what is expected of them.

Praveen Varma who penned the story and directed major portion of the film sadly passed away before the release and it would be unethical to comment about his work. So we would like to keep this particular aspect as simple as we can. The story is relatable to many and it has an interesting backdrop. Narration and screenplay could have been better as a bit too much cinematic liberty has been taken to narrate certain facets of the film.

Most of the film is shot in night set-up and the cinematographer Diwakar Mani produces a great output. His low-lit visuals set the mood and the tempo. Sunny MR’s music and background score are excellent.

The film is not as engaging or entertaining as a real super over but it has its bright moments here and there. It starts off on the right note with gripping scenes but the lack of thrilling elements in the middle portion takes a toll on the watching experience. The film is more like a rollercoaster ride with its own share of ebbs and flows. The run-time has been kept crisp and that is a positive.

Watch or Not?: You might give it a try if you have too much time to spare.

Ever since its inception, Allu Arjun starrer Pushpa has piqued the interest of the audience. The first Pan-India venture of the Icon star has...
Read more
Movie News

R Madhavan recovers from Covid-19; hopeful to resume his work

R Madhavan has been filming for his forthcoming film called ‘Amriki Pandit’ in Bhopal since the last few weeks. Despite stringent safety measures on...
Read more