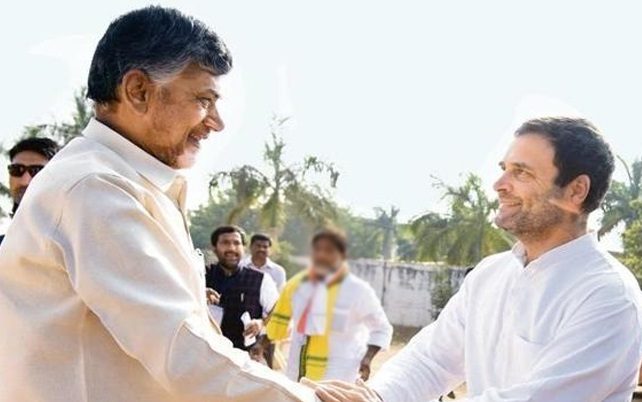 Naidu, who blamed the election commission and Centre, for the alleged irregularities in the way the elections are conducted, even reached out to the Supreme Court, demanding to count 50% VVPAT slips. But the apex court has turned out the petition right away, shocking the opposition parties, who filed it.

Now Naidu and Rahul Gandhi discussed about the same. The duo had a word about the polling trends of the five phases of the elections. Reportedly, they also discussed about the strategies to be implemented to restrict BJP from forming government. After concluding the discussions with Rahul, the AP CM left to Kolkata to campaign for Mamata Banerjee’s Trinamool Congress party.

It seems, Naidu is leaving no stone unturned for going against BJP at the Centre and is making every effort to bring it down from the Centre. While the AP assembly and Lok Sabha results are scheduled to be out in two more weeks, it should be seen, what more plans, Naidu comes up with, in the coming days.

Jagan Mohan Reddy won last year’s assembly elections with a majority that the AP people haven’t witnessed so far. Since then, he has been...
Read more

There was a considerable amount of criticism evolved from the AP people when the Tollywood big wigs met KCR to permit them to conduct...
Read more
Movie News

In the most recent two years Jahnavi had kept herself occupied with many Bollywood films. The entertainer beyond a reasonable doubt misses her late...
Read more
Movie News

Corona pandemic is booming rampantly and spreading across the country. The central and state governments have announced a lockdown for the virus consecutively in...
Read more
Movie News

It is difficult to say what kind of statements Ram Gopal Verma would make on others. He sometimes intentionally lands in controversy with his...
Read more
Movie News

Prasanth Varma made impressive debut with the film Awe. Though the film doesn't succeed as expected commercially, it is a very good start for...
Read more

Jagan Mohan Reddy won last year’s assembly elections with a majority that the AP people haven’t witnessed so far. Since then, he has been...
Read more
Political News

Main person from Prashanth Kishore team to work for TDP

These days, the political strategists are playing important roles in several regional parties and the scenario of the Indian political system has changed a...
Read more
Political News

Chief Minister K Chandrasekhar Rao has announced a huge gift to Telangana people today, where it’s undoubtedly going to be a water festival to...
Read more