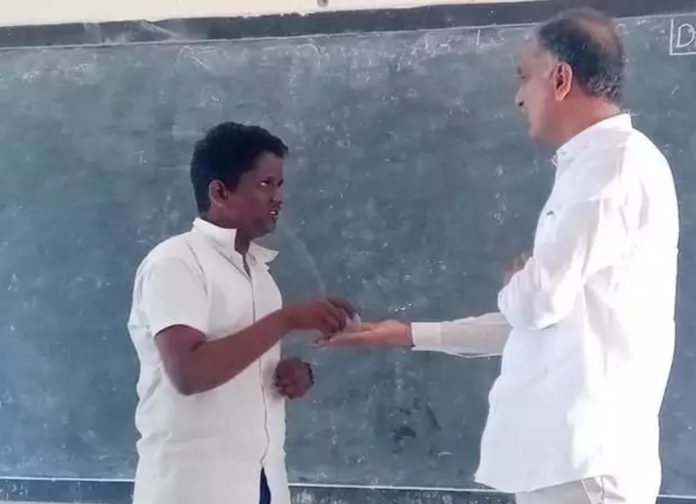 Telangana Finance Minister Harish Rao has conducted a sudden inspection recently in a government school in the state and was shocked to know that the students are unable to answer some basic questions.

Harish Rao is known for his proactive nature. Several times in the past, his instant reactions, his gestures in public won the hearts of many. His uncompromising attitude troubled the government officials too. Now one such incident has been taken place in Hyderabad.

The minister has recently visited Zilla Parishad High school in Sagareddy’s Kandi. He rushed into 10th class and asked some basic questions to students like mathematical tables, Capital cities of India, spellings, etc. But none of the students whom the minister picked were able to answer to any of the questions. Shockingly, the 10th class students could not write the teacher’s name on board.

Aggrieved over it, the minister went against the teachers and told them to provide quality education. He questioned them what is the use of schools when the foundation is weak?

The entire scene had been shot by one of the students in the class and the video is now going viral all over the social media. The netizens are appreciating Harish Rao’s move, saying that one such inspection is necessary across all the government schools to alert the teachers.

Exclusive: Flop Heroine, but a group creating offers for her