In Bhainsa, Nirmal district of Telangana, incidents of attacks, sabotage, stone-pelting and arson between two factions created a terrible atmosphere. Many homes and cars have damaged in this riot.

Several police officers also injured in the attack. There are curfew-like conditions in the city. After this, Section 144 has imposed in the area. Not only this, because of the seriousness of the situation, the police have stopped internet service in the entire city.

According to the information received, a youth going on a bike while committing heavy noise in Korba Gali of Bhainsa stopped by the locals.

The said youth left from there, but after some time came back with some of his people and stoned the houses and properties of people belonging to other communities.

Not only this, but some houses were also set on fire. In this case, one house wholly burnt, while 15 homes have partially damaged. Mischievous persons set fire to 24 two-wheelers, 1 one car, one auto, and some other vehicles by spraying petrol: cylinders and other items from houses set on fire after being thrown on the road. 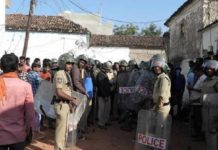 Riot in Bhainsa and other cities, Today decision on municipal election