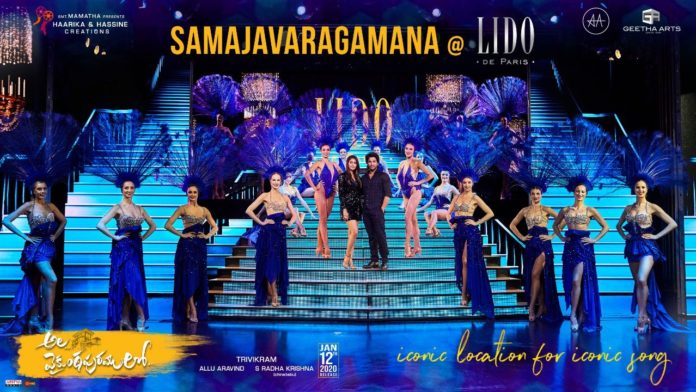 With 75 million views and over 9 lakh likes, Samajavaragamana has turned out to be a huge hit. It earned the record of the most liked Telugu song, thus offering the film a mega promotion.

So the makers are now considering the song as prestigious and are planning to shoot it in special manner. Regarding this, the makers are shooting the song in Paris at an iconic place, which is first for any South Indian actor and film, as claimed by the movie team.

“We cherish this memory and hope you will enjoy the song on screen too! #AlaVaikunthapurramuloo”, Geetha Arts official Twitter handle tweeted.

After a disappointment like Naa Peru Surya, Naa Illu India, Bunny had took his sweet time to come up with his next film. Adding to it, as there are already two big hits like Julai and S/o Satyamurthy in the combination of Trivikram and Allu Arjun, Alaa Vaikunthapuramloo earned a good buzz.

Ala Vaikunthapuramloo is scheduled for the grand release on 15th of January, on the occasion of Sankranthi. Pooja Hegde is playing the female lead and Trivikram Srinivas is directing the film. Geetha Arts along with Harika and Hassinee Creations is producing Alaa Vaikunthapuramloo.