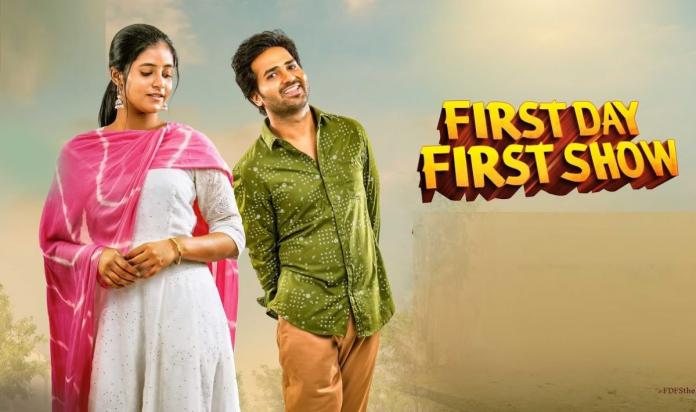 Set in early 2000s time frame, the film opens with the story of Srinivas ( Srikanth Reddy) an ardent fan of PSPK who falls for his college mate Sanchita ( Sanchita Bashu). Upon her request, Srikanth decides to get FDFS tickets of Kushi movie in their area. What all difficulties he has to face to get the tickets forms the story of the film. Will Srikanth be able to get the movie tickets for his girl?

New comers Srikanth Reddy and Sanchita Bashu did well in lead roles. Vennela Kishore evokes some laughter in first half but falls flat in the later half. One of the directors Vamsidhar Goud acted in an extended cameo role and makes his presence felt with some fun dialogues and scenes.

Tanikella Bharani, Srinivas Reddy and Mahesh are fine in their respective roles. Director KV Anudeep’s cameo in one scene is wasted completely.

One would wonder why this movie needs two Directors Vamshidhar Goud and Lakshminarayana Puttamchetty. Directors couldn’t leave a mark as they do not have a good storyline to tell. Story and dialogues by Anudeep are weak. Cinematography is just okay and nothing specific to mention. Editing is mediocre. Though the story has no scope for good songs, Radhan makes his mark with one situational montage number. Production values are just fine

First Day First Show is a single-point stretched drama that is completely focused on Pawan Kalyan’s craze in early 2000’s and may give a nostalgic feel to his hardcore fans. When a movie has very thin storyline, it needs to be compensated with excellent entertainment to satisfy the audience and unfortunately, this movie lacks both. It may work with hardcore pspk fans, but doesn’t have the potential to work with general audience.

Movie ends on a “Kushi” note as the hero finally gets a ticket and watches the movie first day first show… the movie is made strictly for pspk hardcore fans..please watch this space for the first on net review

05.40 A.M: First 40 mins of 2nd half has some fun moments and dialogues and will be nostalgic for PSPK fans..other heroes fans could also relate to some of the scenes. Nee navve song is good..

1st Half Report: 1 hr into the movie, interval time – later 30mins of the first half is a little bit better than first 30 mins..heroe’s all trials to get tickets to go vain.. the story is very thin

04.30 A.M: First 25 mins into the movie. The narration is very slow..not much comedy.. hero is introduced as a PSPK fan who is trying to get tickets for the Kushi movie.. the first song is ok and college scenes between the hero and heroine are going on now

First Day First Show is a Romantic, drama film, The film stars Srikanth Reddy, and Sanchita Bashu in the lead roles and Tanikella Bharani, Vennela Kishore, and Srinivas Reddysupporting roles. This film is Directed by Vamshidhar Goud, and Lakshminarayana Puttamchetty and Produced by Srija Edida, and Sriram Edida. It is made under the banner of Poornodaya Pictures, Srija Entertainments, and Mitravinda Movies.