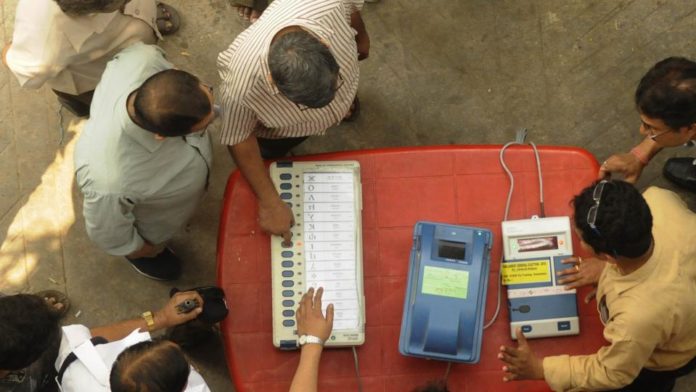 Now, it’s official.  Elections to the Nizamabad Lok Sabha constituency, where a record number of 185 candidates, most of them farmers, created some problem as far as Electronic Voting Machine (EVM) is concerned.

It was a novel protest by the farming community, especially those who are cultivating turmeric and red gram, for not getting remunerative price for their produce.  Interestingly, K Kavitha, the state Chief Minister K Chandrasekhara Rao’s daughter, is re-seeking elections from Nizamabad Lok Sabha constituency.

It also caused some embarrassment to the ruling party as the unrelenting farmers refused to relent, in spite of the TRS nominee herself, assuring their demands be met.  Though, initially, the TRS chose to shift the blame on the Centre, the Union Home Minister Rajnath Singh, who was in state camping for the success of his party candidates, stoutly denied and made it a ‘state subject.’

Back to EVMs, for the first time in the country, the Election Commission has agreed to use 12 EVMs to accommodate all the 185 candidate names and the party symbols, to conduct the polls as per schedule without any hindrance.  About 26,820 ballot units, 2,240 control units, and 2,600 VVPAT’s will be used in the Lok Sabha constituency.

This was disclosed to newsmen by the deputy Election Commissioner, Umesh Sinha.  According to him, the two PSUs – Electronics Corporation of India Ltd (ECIL), the manufacturer of EVMs and the Bharat Heavy Electricals Limited (BHEL) officials, have already swung into action to assure smooth conduct of the poll in Nizamabad LS constituency.  As many as 600 engineers, who were involved in manufacturing this fourth generation EVMs were also inspected the units to be positioned in various booths.  The EC had also engaged master trainers to train to the polling staff.

Special care also been taken by reducing Sector Staff burden to mere 5 polling booths, instead of 8 to 10, for better handling to conduct polls smoothly. The EC had also taken addition care by engaging zonal staff, supervisory officials and special observers, apart from the regular overseeing manpower.

Nizamabad LS will go into history pages, where a hard fought triangular contest is expected to witness, with the ruling TRS candidate Kavitha facing tough challenge from the senior Congress leader Madhu Yaski Goud and the BJP nominee.

He is one of the most senior leaders in the state and has a very good reputation as the people’s leader. He belongs to...
Read more

Sanjay Dutt who was once a top hero in Bollywood has now turned antagonist and character artist. Working for almost four decades in Bollywood,...
Read more
Movie News

Lock down effect: Shooting status of our star heroes’ movies before lock down

Corona virus has closed down every industry working from March to almost 2 months. Recently many industries started to working and is recovering from...
Read more
Movie News

Telugu Desam Party Chief Nara Chandra Babu Naidu is planning to increase the mileage of his party so that he can resist the unstoppable...
Read more

Oxford’s covid-19 vaccine could have only 50% success rate

A vaccine that could come in handy to prevent novel coronavirus (COVID-19), has a greater probability that it will be produced from the Serum...
Read more
Movie News

Sanjay Dutt who was once a top hero in Bollywood has now turned antagonist and character artist. Working for almost four decades in Bollywood,...
Read more
General News

After 28 years, US Govt thinks of conducting nuclear tests!

No one will forget the World War 2 where USA bombed Japan with 2 nuclear bombs which resulted in a complete destruction. At that...
Read more
Political News

US President Donald Trump is back in news with an order to reopen religious centers in all parts of the country. Trump feels that...
Read more