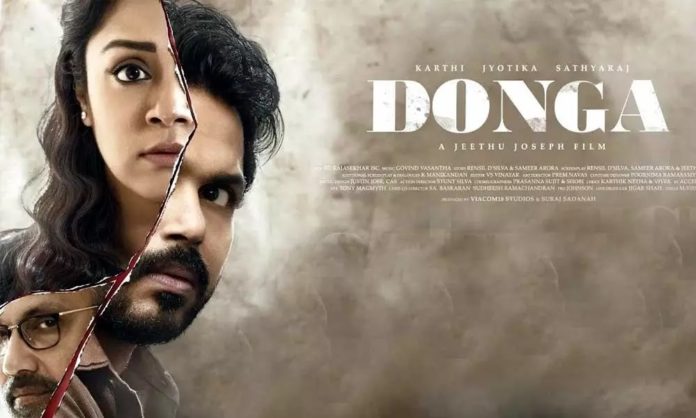 Karthi a couple of months back scored a memorable hit with Khaidi which is both commercially hit and critically acclaimed. Now, Karthi is back again with another thriller this time laced with family emotions in the form of Donga. Promos are engaging. Let us see how the movie is.

Gnanamurthy (Satya Raj) is a political leader who along with his daughter Parvathy (Jyothika) are in search for their family member, Sharwa who runs away 15 years back. On the other hand, Vicky (Karthi) is happy go lucky guy who is a thief in Goa. One fine day, with the help of Police, Vicky enters Gnanamurthy’s house in the disguise of Sharwa. Soon Parvathy knows that Vicky is not Sharwa.

At the same time, few murder attempts on Vicky started to happen? What kind of consequences did Vicky face as Sharwa? Who is the original Sharwa? What happened to him forms the rest of the story.

Karthi has given good performance as Vicky and Sharwa in the movie. There are many variations for Karthi in this movie like comedy, action, sentiment etc., and Karthi has done justice to all. Recently Karthi has given intense performance in Khaidi and it will be refreshing to see him in a light hearted character for some time. The next who scores brownie points after Karthi is definitely Satya Raj. He has given stand out performance. His combination scenes with Karthi came out really well. Jyothika disappoints. Not that her performance is bad, there is nothing much she does in the movie. Her character is wasted. Sowcar Janaki, Seetha has done justice to their characters. Rest all are okay.

Just like his much talked film, director Jeetu Joseph came up with another simple line in Donga. Though his story line is simple, he made it interesting with enough twists and turns. His screen play is some what boring. The only thing is that director failed to bring in emotional connect to the audience. Songs are not so good but the background music is impressive. Production values are not up to the mark. We get the feeling that movie is made with limited budget. VS Vinayak’s editing is also not so good.

Donga has interesting family thriller premises. But the director failed in to bring in the required family connect which hinders the flow for the audience. Though the film is touted to be a thriller, except for few twists here and there, remaining part seems boring. Climax twist is unpredictable and it gives good feel to the audience. Performances of Karthi and Satyaraj, few action blocks and final twist are the main plus points for this family thriller. Rest all is a boring drama.

Second half answers all the questions that was raised in the first half. Action blocks are dealt way. Major twists happen in this part. However, there will be a feeling that emotional connect is missing. Overall, Donga second half is OK. Full review will be live within few minutes.

01.05 P.M: Movie comes to an end with some twist revealing crime drama elements.

01.00 P.M: Movie coming to a conclusion.. All the twists are being revealed

12.55 P.M: After some clues, Karthi finally comes to know, what happened to Satyaraj’s son Sharwa. But wait, here comes the major twist

12.50 P.M: Karthi finally comes to know who are behind all this

12.40 P.M: Karthi started finding leads about who are trying to kill him

12.00 P.M: Second half starts with a sudden Lorry accident to Karthi, he narrowly escapes

Donga first half gives good impression to the audience. Suspense factor is maintained well in this part. Satyaraj, Karthi and Jyothika impresses. Second half is extremely crucial for the film’s fate. We will be back in a couple of minutes.

11.44 A.M: Movie comes to an interval with a big twist revealing between Satyaraj and Policr

11.38 A.M: Some truths are being revealed about who is behind Karthi

11.28 A.M: Impressive montage song between Karthi and Nikhila Vimal is on

11.21 A.M: Karthi is facing difficulties from family members to prove him as Sharwa

11.08 A.M: Heroine Nikhila Vimal gets introduced as Sanjana. She is girl friend of Sharwa in the past

11.00 A.M: Karthi reveals a major twist that he is not Sharwa but acted like one just to escape from Goa Police. Only Jyothika and her grand mother Sowcar Janaki knows this truth.

10.52 A.M: Satyaraj comes to Goa for Sharwa with the help of Police and it turns out that Karthi is Sharwa. Then Satyaraj takes Karthi to his home.

10.45 A.M: Karthi gets introduced as a tourist guide and a thief in goa

10.40 A.M: Satyaraj and Jyothika are father and daughter. Missing Sharwa is Jyothika’s brother

10.37 A.M: Both the characters are waiting for a guy named Sharwa who left their home in his early years.

10.36 A.M: Satyaraj too makes his entry in a simple manner

10.35 A.M: Cut to present after 15 years, Jyothika makes her entry in a simple manner with horse riding

10.25 A.M: Karthi is back with yet another interesting film titled Donga with run time 150.01 minutes

Going by the snaps of Ram Charan that are being shared on social media of late, he is going to sport one of his...
Read more
Movie News

Taapsee Pannu, who carved a niche for herself with her impressive acting performances and outspoken nature, is gearing up to treat the audience with...
Read more
Movie News

Universal actor and Makkal Needhi Maiam founder Kamal Haasan has been hospitalized on Wednesday evening in Chennai. As per reports, the Vikram actor is suffering...
Read more

Going by the snaps of Ram Charan that are being shared on social media of late, he is going to sport one of his...
Read more
Photo Gallery

Taapsee Pannu, who carved a niche for herself with her impressive acting performances and outspoken nature, is gearing up to treat the audience with...
Read more
Karthi a couple of months back scored a memorable hit with Khaidi which is both commercially hit and critically acclaimed. Now, Karthi is back again with another thriller this time laced with family emotions in the form of Donga. Promos are engaging. Let us...Donga Movie Review and Rating