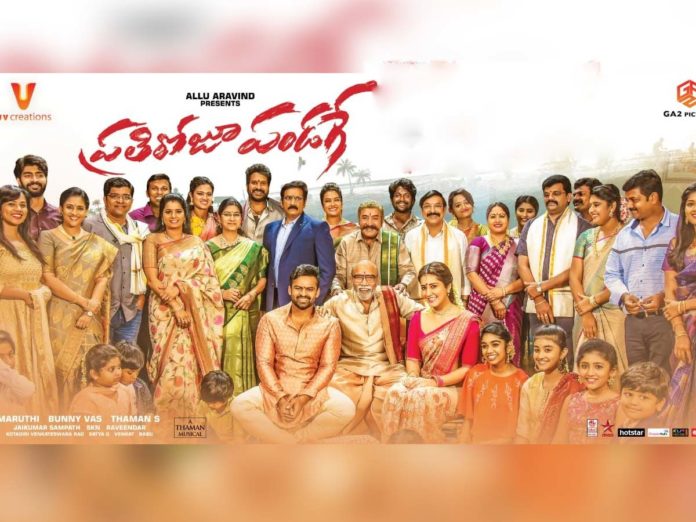 But the family members leave to US after a revelation. Sai Dharam Tej, the grandchild of Satyaraj then decides to teach a lesson to all of them. How did he convince them to come back to India and share a good bonding with Satyaraj is what to be seen in the theaters.

Performances speak a lot in Prati Roju Pandaage movie as almost every single artist has delivered a promising work. Sai Dharam Tej is energetic as usual and has come up with a decent performance. Raashee Khanna surprises throughout her presence with great acting skills. She is glamorous too. Rao Ramesh is brilliant as usual and Satyaraj lives up to the expectations. Even rest other artists did well.

Director Maruthi is known for making some trendy films and is also popular for such path breaking films in Tollywood. Prati Roju Pandaage is not a movie to be expected from a director like him.

Loving parents just as one loves their kids is what the film is all about. The execution is bad even though the point is good. A family dinner comedy scene and a few other fun scenes in parts are good.

Most of the songs in the film are montage based. Two to three songs in the first half are shot well. Much hyped ‘Thakita Thakita’ song disappoints in the second half. Thaman has nothing much to do even with the background score.

Keeping in mind the action hero image of Sai Dharam Tej, the makers tried to include fights even though the emotion fails to convince the audience. The last 30 minutes of the film is emotional and impressive. The dialogues are heart touching in the climax and can be considered as an only ray of hope for the film. Editing is a total flaw. The narration is dead slow and deserves a fine trimming. DOP is adequate.

Neither comedy levels nor emotions that one witnessed in Maruthi’s earlier films can be expected in Prati Roju Pandaage. Except for climax, all the emotions seem forced which is a major minus to a film that is majorly betting on such family emotions. Logic-less points and silly comedy in parts further disturb the audiences mood.

Just like the first half, even the second half of Prati Roju Pandage is slow and lacks anything. Except a song and few comedy scenes, nothing seems interesting. Emotional dialogues in the climax are good. It can act as a savior for the poor content. Review follows.

4:44 AM: Climax dialogues are really good.

4:41 AM: SDT teaches a lesson to family and some realization scenes are going on.

4:38 AM: SDT says that he is conducting “Pindapradhaanam” to Satyaraj. But shockingly he does it with family members photo. Shocked over it, all of them starts to India.

4:25 AM: Now Murali Sharma shocks seeing Satyaraj alive and gets pissed off on Rao Ramesh.

4:19 AM: SDT shirtless fight with goons during a family pooja.

4:12 AM: Whole family trying hard to impress Satyaraj for his wealth.

4:04 AM: Finally a very good comedy scene between entire family.

3:58 AM: Boring comedy scenes going on to impress Satyaraj.

3:53 AM: Satyaraj’s kids are feeling bad as their father’s death has been extended for another 2 weeks but they don’t have leave for more than 5 weeks. They want to go back to US.

3:46 AM: SDT explains the reasons behind marrying Raashi. But also convinces that he loved her.

Prathi Roju Pandage has a very flat line. Montage songs, love track between the lead couple, few comedy scenes and performance of the actors is good in the first half. But the story has nothing much to discuss as of now. The scenes appear predictble and makes the entire product a below average stuff. The movie’s fate will depend on the second half.

3:33 AM: Satyaraj falls ill and gets admitted in hospital, while SDT is yet to tie knot to Raashi.

3:28 AM: Some comedy scenes are on. Just a below average stuff.

3:25 AM: SDT’s dad is not happy as he wanted his son to get married to his friend’s daughter in US.

3:21 AM: SDT calls everyone to Rajamundry for wedding and everyone agrees to attend.

3:19 AM: Nothing great as of now. The film seems to be an average stuff for now. The narration is slow.

3:14 AM: SDT meets Vijay Kumar to clear differences between them. The scene turns emotional.

3:11 AM: Satyaraj indulges in a controversy with two goons for a land. SDT involves in it and its time for a fight.

3:08 AM: Senior actor Vijay Kumar is Raashi’s grandfather. He is against Satyaraj as the latter did not support when he got heart stroke.

3:04 AM: Raashi doesn’t understand why SDT wants to marry her.

3:01 AM: Prathi Roju Pandage crux is Rao ramesh likes his son a lot, but is not concerned much about his dad (Satyaraj).

2:58 AM: Comedy scenes between Suhas, SDT and Raashi are on. Just okay.

2:54 AM: Sathya Raj childhood friend’s daughter is Raashi Khanna. Aarna is her character’s name. She is a dubsmash celebrity.

2:52 AM: Grandfather expresses his wish to see SDT’s marriage.

2:49 AM: SDT takes grandfather to Peddapuram to make him meet his childhood girlfriend.

2:46 AM: Just established characters for the first 20 minutes.

2:41 AM: Satyaraj has 3 sons and 1 daughter. Three of them are living abroad and one in India.

2:31 AM: SDT goes to Rajamundry to meet his family.

2:27 AM: A simple introduction to Sai Dharam Tej in airport.

It is known that Nitro Star Sudheer Babu has teamed up with director Mahesh for his upcoming film, which is titled 'Hunt'. Produced by...
Read more
Prati Roju Pandaage Movie reviewRating: 2.5/5 Story: Upon knowing that Satyaraj is going to die in five weeks due to cancer, his kids and grandchildren visit India. But all of them get worried of their jobs and such stuff after knowing that Satyaraj is not going to die for another...