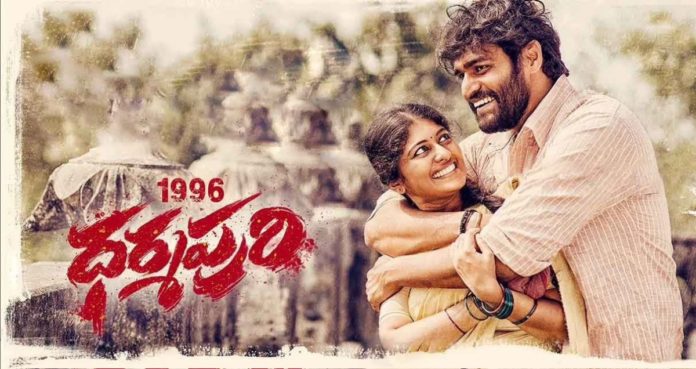 A small film titled, 1996 Dharmapuri starring Gagan Vihari and Aparna Devi as the lead pair created curiosity with its promotional stuff. Directed by Viswa Jagath, the film has hit the screens today. Let’s analyze it.

Dharmapuri is a rural village drama that revolves around the love story of Suri(Gagan Vihaari) and Malli(Aparna Devi). Suri who is the son of the village sarpanch loves Malli who also has a political backdrop. After repeated trials, Suri impresses Malli and they both decide to marry with the acceptance of family members. But as a major twist in the narrative, Suri goes missing on his marriage day. Where will Suri go? What is the role of Malli in the entire episode? Will Suri and Malli reunite again, forms the rest of the tale.

Gagan Vihaari is good with his acting and dance movements in a situational love song. Aparna Devi carries the half-saree attire nicely and adds a fresh vibe to the screen with her screen presence. Her dialogue delivery in Telangana accent elevates a couple of key scenes. The romantic episodes between the lead pair are executed in an authentic manner.

Other actors who did supporting roles did their part quite effectively.

Music by Osho Venkat is good as his background and songs are a major plus for this rural drama. The cinematography work by Krishna Prasad is apt for the film’s genre. His framing and lighting setup elevates the rustic flavour in the film nicely.

While the dialogues written by Viswa Jagath are good, as a director he succeeded to an extent in showcasing this village drama on a proper note.

Editing by Marthand K Venkatesh is good as he kept the runtime of the film within limits by ignoring the unwanted episodes in the narrative. Choreography by Sekhar VJ for one love song is nice and has a fresh concept. Production values by Dasari Bhaskar Yadav’s banner are decent.

In an overview, Dharmapuri is a love story set in a village backdrop and interlinked with small-town politics. The performance of the lead pair, and the twists and turns revealed in the second half are good. On the flip side, the lack of a strong storyline and the usual commerciality we see in Telugu films come as a demerit for the film. All we suggest is to keep a check on your expectations and watch Dharmapuri and it will surely end up as a one-time watch this weekend.