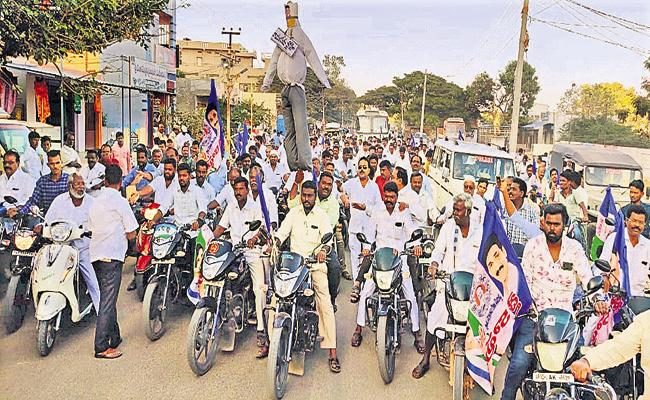 The decision of the AP government to have a ‘Three Capital’ for the overall development of the state did not go well with the farmers of the opposition TDP and Amravati region.

Subsequently, farmers in the capital region are protesting against the decision of the ‘three capitals’, and to continue Amravati as the capital, Prime Minister Narendra Modi laid the foundation stone and performed Bhoomi Pujan.

The TDP is searching in every possible way to stop all three capitals. As part of Chandrababu Naidu, Chairman of the Legislative Council Sharif recommended the bills to the selection committee, making a short halt to the bill.

TDP’s efforts on the capitals line did not go well with the YSRCP and against the TDP party by students JAC and YSRCP youth wing Along with the celebrated rallies and protests.

The rally also saw massive participation of the public as the opposition is opposing the government’s idea of ​​fully developing the state rather than focusing on one area like Amravati.

The public participation in these rallies clearly shows that the people of North Andhra are not happy with the opposition’s stance on the issue of capital, and this, in turn, could become a negative point for them in the next elections.