You can offer plastic waste as school fees in this school 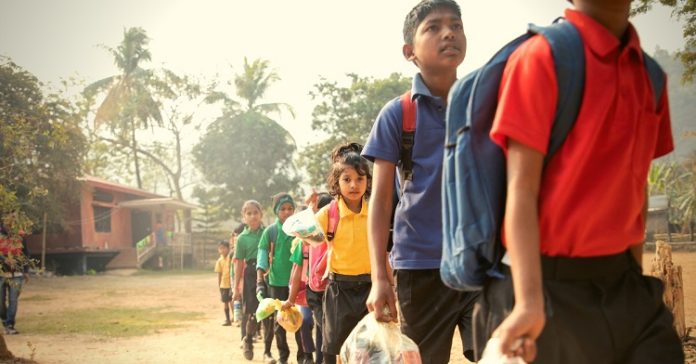 How would it be, if a school accepts plastic waste, instead of money as school fees? Exciting right? Here is one such school in Assam which does the same.

“We wanted to start a free school for all, but stumbled upon this idea after we realised a larger social and ecological problem brewing in this area. I still remember how our classrooms would be filled with toxic fumes every time someone in the nearby areas would burn plastics. Here it was a norm to burn waste plastic to keep warm. We wanted to change that and so started to encourage our students to bring their plastic waste as school fees,” said Parmita Sarma, who, along with Mazin Mukhtar, founded the school in June 2016.

The story behind Akshar school

In 2013, Mazin came to India from New York on a different school project. As part of his project, he met Parmita, who was pursuing Masters in Social Work at the Tata Institute of Social Sciences (TISS). Much to the surprise, even she was planning to work in the education sector.

The duo then worked on the project and successfully launched Akshar school, to bridge the gap between conventional academics and vocational training.

“We realised that education had to be socially, economically and environmentally relevant for these children. One of the first challenges was to convince the local villagers to send their kids to school, as most of them would work as labourers in the nearby stone quarries. So among other things, we had to design a curriculum that would fit their needs and build a creative pipeline of employment, post-education,” said Mazin.

To meet the monetary needs, the duo came up with the idea of peer-to-peer learning model, where the seniors would teach the juniors and in return, the seniors would get paid with toy currency, where it is acceptable in a nearby shop, to buy petty things like snacks, clothes, toys, shoes etc.

“Students can come to us with their collection to help them buy things online. We simply exchange it for real currency and buy them things from Amazon that can be bought within that amount,” Parmita said.

Adding to it, the school is also educating the community about the health hazards they were exposing themselves to, with the regular practice of burning plastic.

“During the winters, most families here create bonfires out of plastic waste and huddle in front of it to beat the cold. We were shocked when we saw this and decided to start educating the community about the hazards they are exposing their children to,” Partima says.

To spread the same, the founders also designed Akshar’s curriculum in a way that would make the children aware of the issues.

In the next step, the villagers will be taught to recycle so that they change, over the time and concentrate on the social issues.

“And, we are already receiving a good response, as many families participating in the recycling drive have agreed to put up signs in front of their homes and shops to spread awareness,” she said.

With the support of student-teacher model, the senior students are carrying forward the procedure.

Later, with the support of teachers, the students create several construction materials with the plastic waste that can help in creating better infrastructure on campus.

Akshar school was initially started with 20 kids and now has over 100 kids, ranging from 4 to 15 years of age. Each of such student brings in at least 25 items of plastic waste weekly.

Students at Akshar, attend classes sitting in open spaces under bamboo roofs. Also going against the age-specific grades or class, in Akshar, the students of differnt age groups study the same thing all at the same time, says Parmita.

But Akshar had to face troubles in implementation, over the time.

“One of the biggest problems with the sector is the relevance of education. These kids needed the right blend of theory and practical knowledge that could enable them enough skills for various job opportunities,” added Mazin.

The founders of Akshar, are also planning to start a full-fledged course on sustainable landscaping to help children find employment after graduation.

Mazin and Parmita, who also got married in 2018, is now planning to expand Akshar nation wide and is aiming to build 100 such schoo;s in the next five years.