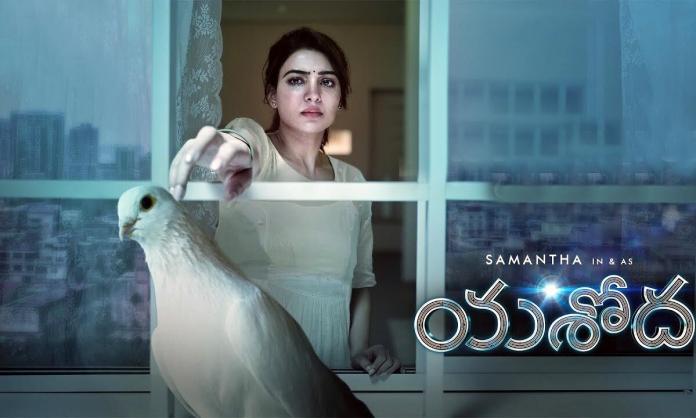 After a long time, Samantha had been gearing up for the release of her film in theatres, with Yashoda, which has been carrying good expectations on it, ever since the release of its teaser. The film has finally been released today, and let’s see how the film has fared.

Story: Yashoda agrees to be a surrogate mother and joins a huge firm which is known for surrogacy pregnancies, providing reproductively challenged mothers withe babies and making them mothers. However, not everything is as it seems and Yashoda soon realises that. What’s wrong with the establishment and what happens ultimately forms the rest of the story.

Naturally, Samantha carries the whole film on her shoulders and keeps the audience entertained and on the edge of their seats from the start to finish. She is also highly impeccable in the fight sequences.

Varalaxmi Sarathkumar, Unni Mukundan, Rao Ramesh, Sampath Raj and the remaining supporting cast is good in their roles, contributing well to the progress of the story.

The story of Yashoda is simple, and the directors manage to keep everyone guessing what’s next very well, at least until 30 minutes into the second half. However, once the twist is revealed and explanations are given, the story becomes diluted and everything becomes very expected. The dialogues by Pulagam Chinnarayana and Challa Bhagya Lakshmi are good.

The background score of the film, provided by Mani Sharma, is one of the major highlights of the film, contributing quite well to the movie. It adds to the overall feel of the movie well.

The production design and cinematography of the film are also good enough, and it clearly shows that the producers haven’t shied away from investing in the film.

Verdict: Yashoda is a good thriller, but turns out to be quite routine in the end. Samantha is very good in her role, and as long as she’s on the screen, she’ll keep you entertained. If not for adulterated climax, one can watch for thriller elements and Samantha.

Yashoda is an action thriller film written and directed by Hari–Harish. It stars Samantha in the titular role alongside Unni Mukundan, Varalaxmi Sarathkumar, and Murali Sharma.

The film score was composed by Mani Sharma, while the cinematography and editing were handled by M. Sukumar and Marthand K. Venkatesh, respectively. Yashoda is scheduled for a theatrical release on 11 November 2022.

6:15 PM EST  – Yashoda movie started with a murder, Samantha signs up to be a surrogate mother

6:30 PM EST  – Investigation starts on the murder of Shiv Reddy a business tycoon. Yashoda moves to a secret house where other surrogates are also kept, Madhu (Vara Laxmi) runs the secret house. Proceedings are flat until now

6:45 PM EST  – Story moves back and forth between Secret surrogate house and the murder investigation. No connection yet between these two parallel stories. Yashoda falls in love with doctor ( Unni Mukundan). Pace picked up compared to first 30 mins of first half..

7:00 PM EST – Story takes an interesting turn now. Yashoda gets suspicious of the happenings in the secret house. Director managed to create some interest around the mystery

7:20 PM EST – Sam’s Fight sequence and the pre interval scene is good. Interval is good and it creates interest on the 2nd half..

First half Report: Movie starts with a somewhat routine story but slowly develops into a mystery thriller that keeps you guessing. Sam’s action in the pre interval scenes is good. Good background score, movie really hinges on how mystery is solved in the second half.

8:00 PM EST – Second half of the movie starts with Yashoda find out what really happens in the secret house. Its all about what is the mystery and who are the people behind it, it also connects with the murder mystery of Shiva Reddy. Movie going on at a steady pace

8:25 PM EST –Samantha sister goes to surrogacy so she wants to find out what’s happening and she is a police trainee..Movie comes to an end..watch this space for the detailed review

Overall the movie is a decent watch, its a mystery thriller that keeps you on the edge for good part of the movie. Could have been better if the climax is not adulterated with sentiment and comedy.