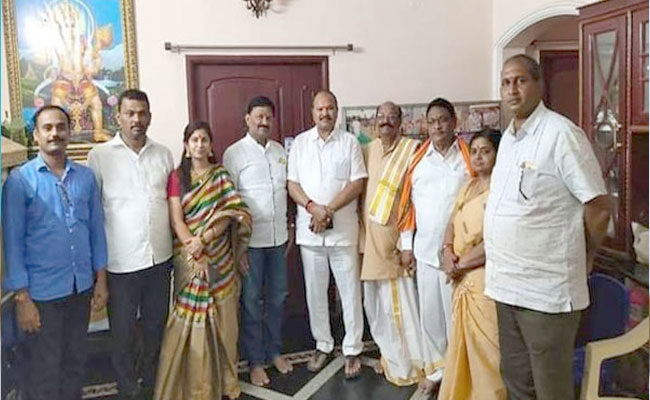 If the reports are to be believed, TDP firebrand leader Yamineni Sadineni is all set to leave the party any time soon. The TDP leader was seen in a photograph along with the BJP AP Chief Kanna Lakshminarayana, hinting that she is all set to jump into the national party.

Yamini is one among the very few leaders of TDP, who extremely went against the opposition party leaders. Though the party chief Chandrababu Naidu stepped back from criticizing the opposition leaders in a few situations, Yamini criticized the YSRCP and also Janasena leaders raising some key points. Especially, she severely went against Pawan Kalyan and criticized him on a personal level, which were not entertained by Naidu at all.

All such efforts to impress Naidu went vain, as he denied to offer her an MLA ticket in the 2019 elections. Adding to it, an audio clip of hers, provoking the followers to stage dharna, has worsened the situation even more. After the election result, Yamini was not much heard in the news and now the picture, alongside the BJP leader, is hinting that she is soon going to leave the party.

However, it may not be a huge loss for TDP if Yamini leaves the party, as she is identified for her loose tongue. But if her exit encourages other leaders in the party to follow the same, then Naidu will have to think about Yamini, even before the things turn bad.