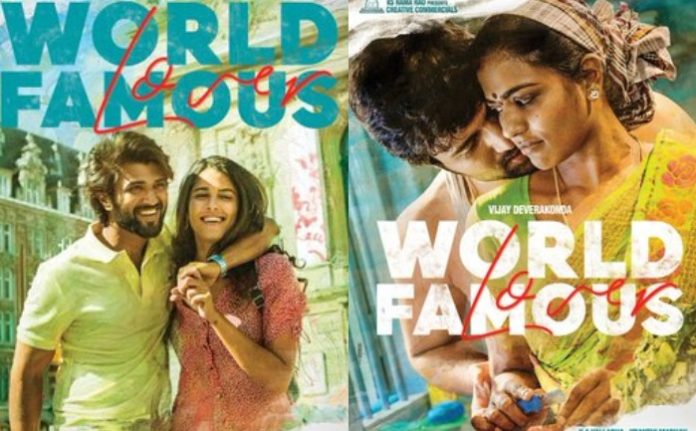 Gowtham (Vijay Deverakonda) gives up his job for his passion towards writing but ignores  live in relationship with his college love Yamini (Raashi Kanna). Yamini gets depressed and decides to leave Gowtham. He struggles to write stories however he starts writing after his break up with Yamini, first he writes the story of Seenayya and Suvarna which is set up in Yellandu and then he writes another story of Gowtham and Iza based in Paris. The rest of the story revolves around if Gowtham becomes a successful writer and does he save his love life with Yamini.

Vijaya Deverakonda did a fantastic act in three different roles as Gowtham (writer), Seenayya (Union leader) and Gowtham (Musician). His penchant for choosing different scripts should be appreciated. His acting in few scenes would reminds Arjun Reddy. He enacted Seenayya character with ease and fervor, very realistic and true to life characterization. Raashi Kanna did a full length emotional role for the first time, she did justice to the role. At times Yamini role seems to be too depressed, her characterization is as such. Aishwarya Rajesh did a zesty role as Suvarna, she lived through the character. Audience will fall in love with her characterization and her acting as village belle. Catherine Tresa has a good screen presence but a very limited role. Izabelle Leite acting is decent.

Kranthi Madhav has choosen a very difficult script and its extremely challenging to appease audience. Even though the first half feels a bit engaging with marriage drama and Seenayya’s plot, lackluster narrative begins soon after the second half starts. Such a script demands good music and songs which are lacking in this movie. The director was not able to convey Gowtham’s fervor for writing and his love for Yamini in a convincing way, one would think what Gowtham really wants. He is successful in establishing strong characters but failed miserably in creating a soul for the movie. Jayakrishna Gummadi’s cinematography work is apt for the different stories that comes in this movie. Gopi Sundar’s music is okay, could have been better.

The World Famous Lover is an amalgamation of three stories where director failed to connect them together to make it a soulful movie. First half is full of heartful emotions and good performances but lacks the same intensity in the second half and ends with a routine rather mundane climax. We have to wait and see how far Vijay Deverakonda’s eminence will pull the crowds to make it an average flick.

Immediate reaction at Intermission: Good performances and heartfelt emotions. Seenaya and Suvarna characterizations are good, on the flip side lacks comedy.

Watch or Not?
You may skip it

It might be a below average fare across the globe, could get decent openings. Thanks to Vijay Devarakonda’s craze but eventually will fall flat. It might end up as a loss venture.

7:40 PM: Gautam thinks he need to give an ending to his story as well.. he realizes why Yamini left him and gives a speech about his stories.. Director kind of connected all dots in the climax, but “might” be little too late.. please watch this space for detailed review in couple of hours

7:30 PM: Gautham acts like a weirdo and kills a person and goes to jail. He returns from jail and finds out that his writings “world famous lover” became famous..

7:25 PM: Yamini Stays stubborn on her decision as she doesn’t want to go back to Gautham.. Pre climax scenes are on now

7:20 PM: Imaginary Paris story is now done..Gautam reminds himself of how it all started with Yamini followed by scenes where Yamini meets Gautham to inform about her wedding with another guy..Highly emotional Gautam goes mad..

7:04 PM: Iza and Gautham meet with an accident and Iza loses her sight..He walks away from her life thinking he is the reason for her loss. Iza gets her vision back as he donates his eyes to her..

6:54 PM: Gautham is an adventurous guy in this imaginary story. Izabelle is shown as a pilot who lives next door followed by “I am so crazy” song.. Visuals of Paris are good

6:47 PM: Second half starts with Gautham imagining another story. He runs a radio station in Paris..Except for Vijay’s performance, everything falls flat..Need to wait and see what’s in store for the next 1 hr

6:33 PM: The Yellandu coal mine imaginary story ends now. Gautham writes this story to tell Yamini that he has a convincing nature within him but she doesn’t..He goes to her office but gets booted out.. Interval time

6:26 PM: Suvarna gets gold medal in open university and Smitha gets to know that she is Seenayya’s wife. Suvarna expresses her love towards Seenayya and he gets convinced and leaves Smitha..

6:17 PM: Seenayya hides from Smitha that he is married and has a kid. He gets caught by his wife for the second time..Suvarna is not happy and keeps Seenayya away.. Movie is running on a serious note..

6:12 PM: Suvarna sees Seenayya with Smitha and gets mad. He hides things from his wife and wants to run a fling with Smitha

6:01 PM: Shatru is shown as Seenayya’s rival..Smitha’s character presentation does not fit into the coal mine setting..Story revolves around Seenayya and Smitha as he gets attracted to her..

5:48 PM: Now the movie enacts his story.. Seenayya, Suvarna and Smitha are imaginary characters in his story. Seenayya (Vijay) is coal mine union leader, Suvarna (Aishwarya) is his wife and Smitha (Catherine) is a junior welfare officer..Seenayya falls for Smitha..

5:42 PM: Story is based on Yellandu coal mines.. Gautam thinks Rashi left him because she is a metro girl (Hyderabad). He reads a newspaper story and gets inspired by it and starts writing a story

5:35 PM: Flashback in a flashback starts now as how they fell in love..Some extreme emotional scenes are on between Gautham and Yamini..

5:30 PM: Gautham quits his job to become a writer, but shown as a slacker. Rashi wants to breakup because of his negligent behavior towards life.

5:23 PM: Flashback opens with Rashi (Yamini) and Gautham living together

5:15 PM: Movie opens up with Vijay’s (Gautham) voice over and him being beaten up in jail

All set for Allu Arjun’s ICON, Dil Raju opens about the film

Mega Powerstar Ram Charan, who was last seen in 2019 Vinaya Vidheya Rama, has a perfect plan for his next releases. The young actor...
Read more
Movie News

The country is witnessing record-high numbers of infection with each passing day. Already many movies teams have suspended their shooting and postponed their release...
Read more
Movie News

All set for Allu Arjun’s ICON, Dil Raju opens about the film

Stylish Star Allu Arjun and Dil Raju have announced their fourth collaboration in 2019, and the project has been titled as ICON. To be...
Read more
Movie News

Actor and philanthropist Sonu Sood has tested positive for Covid-19. The actor is among the most active celebrities across the world to help the...
Read more
Movie News

British actress Helen McCrory, who is known for her portrayal in 'Harry Potter' movies and the television show 'Peaky Blinders', has died at 52....
Read more

The Tirupati Lok Sabha by-polls have become a matter of high importance for all the political parties in Andhra Pradesh. Every party has campaigned day...
Read more
Political News

Jagan not ready to take this decision

The first wave of Coronavirus was devastating for a lot of reasons. A lot of people suffered financially and personally because of the lockdown...
Read more
Political News

For months together, campaigning for the Tirupati by-elections has been going on by various parties. Telugu Desam Party was the first to start its...
Read more
Political News

Former Karnataka CM H.D. Kumaraswamy, who tested positive for coronavirus, was shocked after the Manipal Hospital didn't provide him with an admission citing a...
Read more

Mega Powerstar Ram Charan, who was last seen in 2019 Vinaya Vidheya Rama, has a perfect plan for his next releases. The young actor...
Read more
Political News

The Tirupati Lok Sabha by-polls have become a matter of high importance for all the political parties in Andhra Pradesh. Every party has campaigned day...
Read more
Political News

Jagan not ready to take this decision

The first wave of Coronavirus was devastating for a lot of reasons. A lot of people suffered financially and personally because of the lockdown...
Read more
Political News

For months together, campaigning for the Tirupati by-elections has been going on by various parties. Telugu Desam Party was the first to start its...
Read more
Movie News

The country is witnessing record-high numbers of infection with each passing day. Already many movies teams have suspended their shooting and postponed their release...
Read more