Who is winning 2019 election battle in AP? 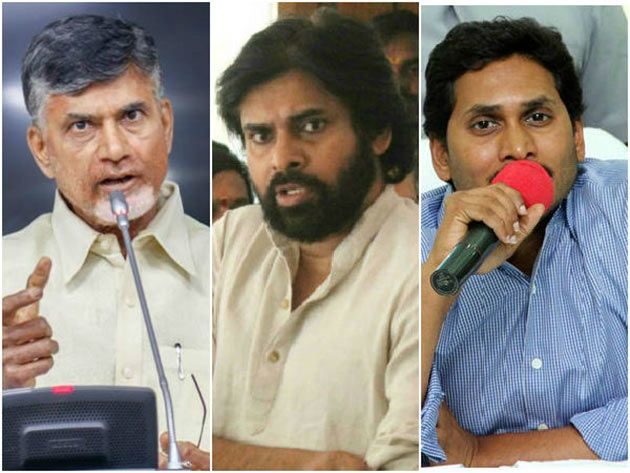 If there is any election that is most unpredictable and a cliff hanger, then it’s the fight between ruling Telugu Desam Party (TDP) and the YSRCP in Andhra Pradesh, where simultaneous polls are going to be held on April 11 to the State Assembly and Lok Sabha.

Although, pollsters are projecting the YSRCP to sweep the polls, yet the ground realities look different as supporters’ of both the parties claim that their victory is a foregone conclusion.

Recent two incidents – the suspicious death of Y S Vivekananda Reddy, brother of late Dr. Y S Rajasekhar Reddy and former MP, and the court reversal to the TDP chief, Nara Chandrababu Naidu’s (NCN) decision to challenge the Election Commission by revoking the transfers of his ‘Man Friday”, Intelligence Chief A P Venkateswara Rao and two others on a complaint from YSRCP – appears to favor the YSRCP prospects.

Notwithstanding pollster’s predictions, the TDP cadre remains jubilant about the prospects of their party retaining power. CBN’s decision to enhance the 40 lakh DWACRA women’s financial assistance,100 per cent hike of old age pensioners, incredible increase in unemployment doles, and many last minute pre poll promises could help to turn the tide in TDP’s favor.

Furthermore, the ruling TDP appears to have managed to do some ‘damage control’ as far as allegations of suspicious death of Y S Vivekananda Reddy. It could push the YSRCP on back foot by asking ‘who declared his death as heart attack, first?” On that count, Naidu could turn the tables on YSRCP and also turning their demand to handover the case to CBI.

Some blood stains on the body later apparently prompted the family members of the deceased and others to raise doubts over his death at his official residence in Pulivendla of Kadapa district. CBN ordered SIT probe no sooner doubts were expressed over Vivekananda Reddy’s death.

However, the TDP jubilation at neutralizing the YSRCP on Vivekananda Reddy’s alleged murder theory

was short lived what with the Election Commission’s directive to the state Chief Secretary to shift out the controversial intelligence chief as well two district SPs of Kadapa and Srikakuam. The YSRCP claims it as a ‘moral victory’ and jubilant.

Added to CBN’s miscalculation to challenge the EC decision, knowing well it may as well boomerang as it will not stand judicial scrutiny, it was major faux pas of the wiliest political leader, a la ‘Chanakya.’

Although, CBNs supporters claim that the Court’s rejection to grant stay on EC directive will have no bearing on party’s electoral process, yet ‘whispers’ among his own party cadres gives an impression that they are fearing worst-ever defeat staring at them, in the do-or-die battle. The freebies effect got eclipsed with the ‘court verdict.’

Thus far, the ‘credibility’ factor, once again, has become the talking point slightly tilting the scales in favor of Jagan’s YSRCP.

Although, actor-turned Pavan Kalyan’s Jana Sena has entered the electoral fray with tactical alliance with Mayawati’s BSP, besides the BJP to make it a four-cornered contests in some constituencies, yet the main battle set to be only between the TDP and YSRCP.

He is one of the most senior leaders in the state and has a very good reputation as the people’s leader. He belongs to...
Read more

Sanjay Dutt who was once a top hero in Bollywood has now turned antagonist and character artist. Working for almost four decades in Bollywood,...
Read more
Movie News

Lock down effect: Shooting status of our star heroes’ movies before lock down

Corona virus has closed down every industry working from March to almost 2 months. Recently many industries started to working and is recovering from...
Read more
Movie News

Telugu Desam Party Chief Nara Chandra Babu Naidu is planning to increase the mileage of his party so that he can resist the unstoppable...
Read more

Oxford’s covid-19 vaccine could have only 50% success rate

A vaccine that could come in handy to prevent novel coronavirus (COVID-19), has a greater probability that it will be produced from the Serum...
Read more
Movie News

Sanjay Dutt who was once a top hero in Bollywood has now turned antagonist and character artist. Working for almost four decades in Bollywood,...
Read more
General News

After 28 years, US Govt thinks of conducting nuclear tests!

No one will forget the World War 2 where USA bombed Japan with 2 nuclear bombs which resulted in a complete destruction. At that...
Read more
Political News

US President Donald Trump is back in news with an order to reopen religious centers in all parts of the country. Trump feels that...
Read more