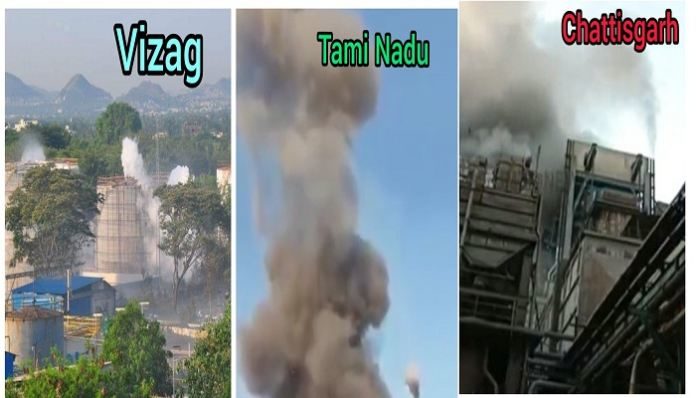 It’s known that 11 people were killed in Andhra Pradesh’s Visakhapatnam on Thursday due to gas leak from a chemical plant. A similar incident was reported from Chhattisgarh as well. Reports said seven workers were injured and three are in critical condition after gas leak at a paper mill in Raigarh district.

“Seven workers of a paper mill have been hospitalised after being exposed to a gas leak, reportedly while cleaning a tank in the mill. Three of them are in critical condition,” Raigarh Superintendent of Police Santosh Singh said.

Seven factory labourers fell sick after inhaling toxic gas at a paper mill in Chhattisgarh’s Raigarh district, police said on Thursday. The incident occurred at Shakti Paper Mill in Tetla village, where the victims were about to clean an open tank on Wednesday evening, Raigarh superintendent of police Santosh Singh stated.

Raigarh Superintendent of Police Santosh Singh & Collector Yashwant Kumar paid a visit to those who were injured by gas leak at a paper mill in the district. Raigarh SP Santosh Singh claimed that the owner of the paper mill did not inform the police, who got to know about the tragic incident from the hospital where the gas leak victims were admitted in pathetic state.

Although it was known that the companies were maintaining international standards and safety precautions, many asserted its faulty norms/standards and few blamed the inefficiency of technicians. An FIR has been registered today morning in Gopalapatnam Police station under sections 278, 284, 285, 337, 338, 304-2 of the Indian penal code. No arrests have been made till date.

Below are the following reasons that could have caused the incident:

2. According to the Manufacture, Storage and import of Hazardous Chemical Rules 1989, Styrene is a monomer and classified as a hazardous and toxic chemical product that should be stored in a temperature below 18 degrees. The police officials have probed and investigations are underway. It was assumed that a probable shut down of the plant due to strict lockdown has due to improper temperature storage of styrene, causing pressure to build up in the storage tank that consequently led valve breakage resulting in the gas leakage.

A similar case of violation of the rules imposed by State Level Environment Impact Assessment Authority could have resulted in Chattisgarh’s gas leakage incident in paper mill.

A common point that can be observed in these tragic indigents where, for instance in Vizag’s LG polymer case, the company chief said 1800 tonnes of styrene was stored and due to prolonged stagnation, styrene could have been subjected to autopolymerization,( i.e conversion of polymers without the presence of heat or light) and eventually releasing the toxic styrene gas, which leaked and affected many people in the surrounding villages in Gopalapattanam at Vizag.

In the second case at Shakti paper mill in Raigarh, the paper mill had an open tank where seven workers were instructed to clean it, but a sudden gas leakage reportedly suspected as entrapped methane has made them to succumb to injuries.

Although to a major extent it was the fault of these companies, no firm was prepared for the reopening of the factories after a long hiatus of 45 days lockdown imposed by center. This is a first of its kind case in an unprecedented way, where a company could have been shut for 45 days with all the materials left over till the reopening. Our TB’s reporters’ analysis also claim that, probably the firms did not get the sufficient time to prepare for the reopening and due to such haphazard fashion, all the stored materials might have remained stagnant, leading to pressure build up in storage tank and resulting in a toxic gas leakage in both the cases. However, the actual truth is yet to be uncovered.

WHO facing huge fire from all over the world

After this COVID-19 outbreak was declared as a pandemic, every individual in the world is having only one doubt in their mind. How could...
Read more
General News

Jack McMorrow’s main aim a month ago was to wrap up his school year online. But unfortunately by the end of April, the 14-year-old...
Read more