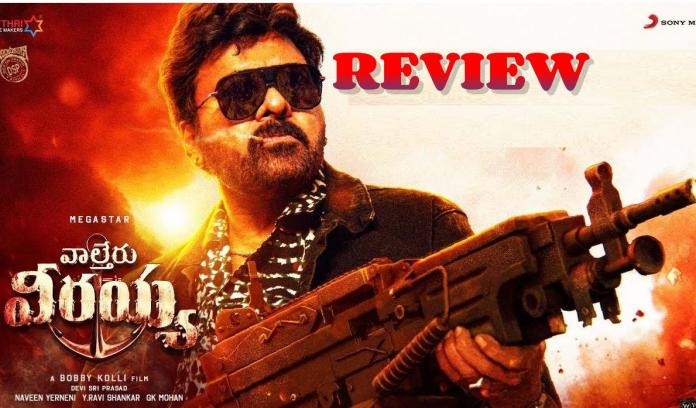 Megastar Chiranjeevi is all set to entertain the Telugu audience in his vintage style, with his film Waltair Veerayya, directed by Bobby Kolli. There have been good expectations on the film, and the film has been released today, so let’s see how this film has turned out to be.

Veerayya is a fisherman in the Waltair region. Veerayya is wrongfully arrested for the death of a few school children due to exposure of drugs in their soft drinks, because of Kaala (played by Prakash Raj), his co-fisherman from the same village. How does Veerayya come out of this situation and stop the drug mafia, and how does Ravi Teja’s character fit into all of this forms the rest of the story..

Megastar Chiranjeevi is truly in his element in the film, and for those who felt that something has been missing in the actor’s performance recently, will be more than satisfied with his performance in this film. Chiru’s vintage comic timing and his performance in emotional scenes are worth mentioning. Moreover, the actor looks fantastic on screen as well, thanks to his styling and makeup.

Mass Maharaja Ravi Teja is as usual good in his role. Every time you see him share screen space with Chiru is surely a Poonakalu loading moment, as director Bobby promised it would be.

Shruti Haassan has got a good role in the movie but she is restrained to first half of the movie. Catherine Tresa don’t have much to do in the film and she playes wife of Ravi Teja. Prakash Raj is good in his role, but it is the same villain role that we have seen him countless times.

The rest of the actors are good enough in their roles. As far as comedy is concerned, Vennela Kishore’s comedy stands out a bit, but the others seem to be wasted.

Director Bobby Kolli came up with an entertaining first half, which flows by in a jiffy. The first half is breezy and entertaining, which makes the second half seem a bit boring and predictable. With the length of the second half being slightly longer, the film feels lengthy in the second half. Bobby has most certainly filled the movie with mass and commercial entertainment, along with some wonderful emotional moments between Ravi Teja and Chiru. The director should have been more careful about the second half though. The action sequences are lengthy and the last song is a speed breaker for the proceedings before climax.

The cinematography is good, and a special mention to the art work in the Boss party song. Mythri movie makers didn’t compromise on the production values at all.

Music Director Devi Sri Prasad has a winner in three songs, and his background music is also quite good in first half. Editing could have been crispier in the second half.

Verdict: Waltair Veerayya is an OK entertainer with right mix of comedy and action. First half is a breeze with comedy/action and the later half is bit routine and lengthy towards the end but overall it has enough commercial elements to make it a potential BO winner this sankranti.

The soundtrack is composed by Devi Sri Prasad with cinematography by Arthur A. Wilson. Waltair Veerayya is scheduled to release on 13 January 2023 coinciding with Sankranthi.

3:40 PM EST: Nuvvu Sridevi song is good with class choreography and scenic visuals. Veerayya helps with investigation and convinces the drug mafia leader Soloman (Bobby Simha) to come to India along with him.

First Half report: First half of Waltair Veerayya is entertaining with right mix of comedy and action. Boss party and Nenu Sridevi songs are good, BGM deserves a special mention. Chiranjeevi is in his elements with his mark of action and comedy. If second half maintains the same tempo then Sankranthi winner is on cards.

4:00 PM : Raviteja introduction as ACP is good followed by Punakalu loading song. Song lives up to its hype, mass feast for fans.

Final Report: Waltair Veerayya is a decent entertainer with right mix of comedy and action. First half is a breeze with comedy/action and the later half has comedy, emotion and action but one feels a bit routine and lengthy towards the end.Three songs and BGM are good, poonakalu loading lives up to its hype. #WaltairVeerayya has enough commercial elements to make it a potential BO winner this sankranti.

Watch this space for FIRST ON NET Review