Vijay Master Movie Review: Partly engaging, but not worth the hype 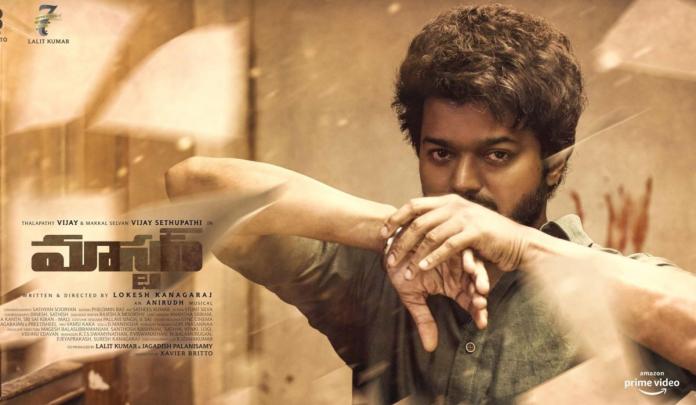 Master, starring Tamil superstars Vijay and Vijay Sethupathi in the lead roles released amid sky-high expectations and buzz today. Lokesh Kanagaraj who previously directed Khaidi is at the helm for Master and that further catapulted the anticipation. The film’s release was postponed due to Covid-19 pandemic and finally made it to the theatres this Sankranti. Scroll on to read our review of Master.

Story: JD(Vijay) is a college professor who is addicted to alcohol and is always intoxicated. But his antics and mannerisms are loved by everyone in his college and Chaaru(Malavika Mohanan) falls for him as she likes his attitude. However, things take a steep turn and JD is transferred to a juvenile school. Soon after, JD comes to know that a local gangster Bhavani(Vijay Sethupathi) is using school-going students for his criminal activities. This sparks a rivalry between JD and Bhavani as the former intends to put an end to the latter’s atrocities. Will he be able to do so and save the kids in the process? If yes, how does he confront Bhavani? The answers to these questions form the remaining plot of Master.

Needless to say, Vijay-Vijay Sethupathi combination is the cornerstone of Master and both these actors have lived up to the high expectations. Vijay as a drunken professor delivers an impressive performance. His trademark mannerisms, portrayal of the character, and screen presence in mass action sequences are some of the main highlights of the film. Makkal Selvam Vijay Sethupathi is a class act and he does exceedingly well in this film. The way he portrays a crooked gangster character is as good as it gets. He carries that wicked look on his face all through the film. It needs to be said that Vijay Sethupathi has outperformed Vijay in Master. Malavika Mohanan plays a brief role but she emotes well in romantic scenes and leaves an impact. Andrea Jeremiah’s character is underused. Arjun Das and Shanthanu are good in their roles.

The film’s tempo keeps going up and down every now and again, but Anirudh Ravichander tries to evoke interest in the proceedings whenever the narrative falls flat. The first half is watchable, despite a few glitches but the second half is mostly a borefest. However, Anirudh Ravichander’s excellent background score infuses life into quite a few scenes in both the halves. Sathyan Sooryan’s cinematography is of top notch quality. He carries the theme of the film with his color palette and visual presentation. He and Anirudh Ravichander deserve special appreciation. Master has a run-time of 3 hours and the editor Philomas Raju could have easily chopped off 40 minutes footage to make the film more engaging..

Lokesh Kanagaraj showed a lot of promise with Khaidi but he fails to match the expectations with Master. Somewhere down the line, he loses the balance between his style of filmmaking and Vijay’s commercial image. He usually picks simple plots and narrates them in an engaging manner, but struggles to recreate his magic with Master. His trademark presentation goes missing in this film. The first half is partly engaging but the screenplay becomes way too boring and predictable in the second half. The lengthy run-time does not help the cause either.

Master which marks the collaboration of Vijay, Vijay Sethupathi, and Lokesh Kanagaraj hit the screens amid great buzz and anticipation, but it fails to match the the pre-release hype. A few portions of the film are engaging, but as a whole, it fails to keep the viewers entertained. The 3-hour long run-time is a big drawback. That said, those who expected mass scenes between Vijay and Vijay Sethupathi will be satisfied to an extent. The film does have a few bright moments but the predictable screenplay and story undo the good work.

Watch or not: Strictly for the die-hard fans of Vijay and Vijay Sethupathi.

Originally, the movie was scheduled to release in April 2020, but the lockdown due to Covid-19 delayed the film’s release. Even though there were tempting offers from leading OTT platforms, the producers were keen on theatrical release only..

Final Report: Movie is a typical mass flick that has few high points, audience will be disappointed if they expect the treatment that Lokesh Kanakaraj had in his previous movies. Vijay’s fans will have few fan moments here and there, Vijay Sethupathi gave a terrific performance in Bhavani role.

09.50 A.M: Movie ended with a climax fight, and message-oriented dialogues.. please watch this space for a detailed review

09:35 A.M: Vijay attacking lorries with arrows..Chase and fight not so good..

09:30 A.M: Sethupathi gang took all the boys in a lorry while Vijay is chasing them…Movie tempo is still down..

08:30 A.M: First Half Report: The first half of the movie is good which gets pretty intense just before interval. The tempo of the movie goes to peak with interval bang. We have to wait and see how this tempo will be carried in the second half of the movie. Vijay’s performance is top notch, Sethupathi’s action in this negative role will enthrall audience. Anirudh’s background score is superb.

08:20 A.M: Vijay realizes that Sethupathi is the culprit and tries to save the two kids. Sethupathi arranges goons to kill Vijay, fight scenes in jail are pretty intense.

08:10 A.M: Average emotional scenes are now on as Sethupathi kills 2 kids. He want the kids to surrender but they try to tell the truth to Vijay (Vijay does not lift the kids calls as he is too drunk)

07:47 A.M: Vijay resigns after a fight broke in college elections and joins an observation home which is full of Sethupathi’s gang. Sethupathi supplies alcohol and food to these boys after he got out of jail. Overall movie is good so far with few slow scenes.

07:40 A.M: Vijay’s made up stories on how he became an alcohol addict will bring some laughter.

07:30 A.M: Sethupathi is contesting for lorry association president. Vijay supports college elections, he agrees to supervise elections and says that he will resign if any bad incident happens.

07:15 A.M: Vijay’s introduction is simple yet impactful, he chases two students who are trying to escape after they harass two girl students. Anirudh’s backgrounds score is worth mentioning. Audience will enjoy chase and fight scene with Vijay’s swag.

06.50 A.M: Master showtime started with a story of Vijay Sethupati As Bhavani, what made him the guy he is. Vijay Sethupati action is terrific. Revenge scenes came out really well.

Mahesh Babu usually likes to operate at a leisurely pace. He works at a comfortable pace and that often results in the production of...
Read more
Movie News

Megastar Chiranjeevi is propelling Waltair Veerayya to record-highs every passing day at the box office and the kind of numbers the film is posting...
Read more
Movie News

Milky white beauty Tamannaah is a pure work of art. The actress is a perfect blend of sizzling white skin complexion and a dream...
Read more
Movie News

Jana Sena chief Pawan Kalyan is finally about to start his much awaited and much delayed yatra from the 24th of this month. He...
Read more
Political News

Ambati Rambabu in the midst of another controversy

YSRCP senior leader and state Irrigation Minister Ambati Rambabu has now found himself amidst another huge controversy after a petition has been filed against...
Read more

Previously, the Hyderabad Cricket Association faced stern backlash from the public during the India Vs Australia series when the vast majority of the tickets...
Read more
Movie News

Mahesh Babu usually likes to operate at a leisurely pace. He works at a comfortable pace and that often results in the production of...
Read more
Movie News

Megastar Chiranjeevi is propelling Waltair Veerayya to record-highs every passing day at the box office and the kind of numbers the film is posting...
Read more
Movie News

Tollywood actor Ali, who was recently appointed as an advisor to the Andhra Pradesh government, made sensational comments on Tuesday. Speaking to the media today,...
Read more