OTT Movie Review: Yaara(Hindi) – Give it a skip, save your time 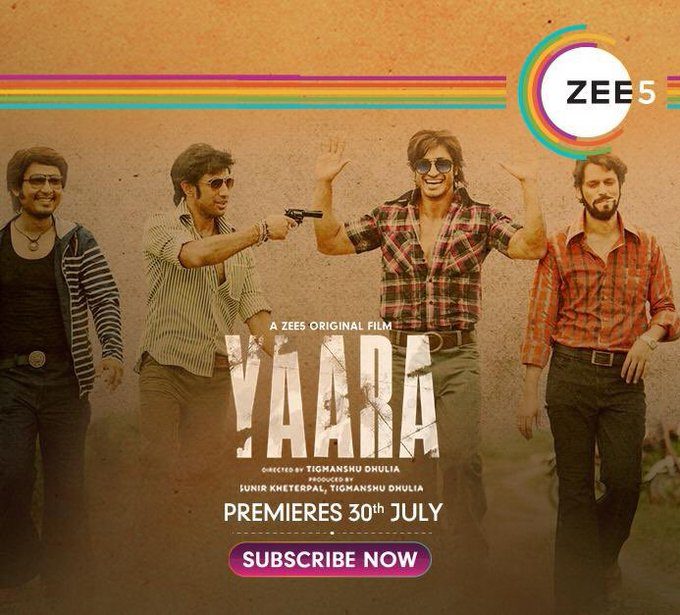 Yaara is an official remake of a French film titled ‘A Gang Story’ which is based on real incidents. Starring Vidyut Jamwal, Amit Sadh, and Shruti Hassan in lead roles, the film was made with theatrical audience in mind. Owing to Covid-19 situation, it was released on digital streaming platform, Zee 5 today. Here’s our take on the film.

Fagun(Vidyut Jamwal) and Mithwa(Amit Sadh) are childhood friends. Following unforeseen events, they become a part of a India-Nepal smuggling gang and they meet Rizwan(Vijay Varma), and Bahadur (Kenny Basumatari) here. The four young lads grow up together and are directly involved in weapons smuggling. One day, they rob a bank and flee the village. Amidst all the high drama, Fagun meets Sukanya(Shruti Hassan) and because of her, they four members land in jail one after another. How does this incident impact their lives? What is the real reason behind it? Will this gang of four eventually meet? The answers to these questions form the plotline.

Vidyut Jamwal and Amit Sadh get more screen time when compared to other two lead characters. Both of them perform very well in their respective roles. Kenny Basumatari and Vijay Varma do what is expected of them. Shruti Hassan gets a meaty role and she does particularly well in emotional scenes. The rest of the cast did a decent job.

Appropriate changes were made to the original story in order to suit our nativity. But the screenplay is not racy enough to keep the viewers on the edge of the seat from start to end. A lot of time was spent on the establishment of characters and related sequences were narrated well. But the film goes off track from there on and all the subsequent episodes are dull and lackluster. The predictability factor kicks in right from the middle portion and there are no thrilling moments which are prerequisite for a film with a subject like this. Even a run-time of 140 minutes looks too long for this film. The director Thigmanshu Sukhia shows technical finesse by getting the best from art, and costumes department. He succeeded in extracting the very best from his lead actors as well. But he fails to come up with the all-important compelling narrative. He failed to get the emotional connect right and consequently novelty goes for a toss.

The film is technically sleek as cinematography, background score, art direction, and production designing are very impressive. But the director fails to gel all this together.

Yaara starts off on a bright note but the wheels come off post the 30-minute mark. Unnecessary subplots worsen things further and even the twists towards the end of the film are uninteresting. Moreover, subjects like these are beaten to death in Bollywood and it neither excites nor has any novelty. The viewer can foresee almost each and every scene in the film and that sums it all up.

Watch or not: Give this film a skip and save your time.

Many noted Telugu filmmakers are now inclined towards digital content and are planning to make feature films, and web series' for OTT platforms. The...
Read more

A few days ago, actor Sonu Sood helped a farmer from madanapalli, by giving him a tractor. Nageswara Rao, the farmer, was also offered...
Read more
Political News

A week ago the Telangana High Court on Friday commanded the state health authorities to review an enquiry into alleged exorbitant fee charges by...
Read more