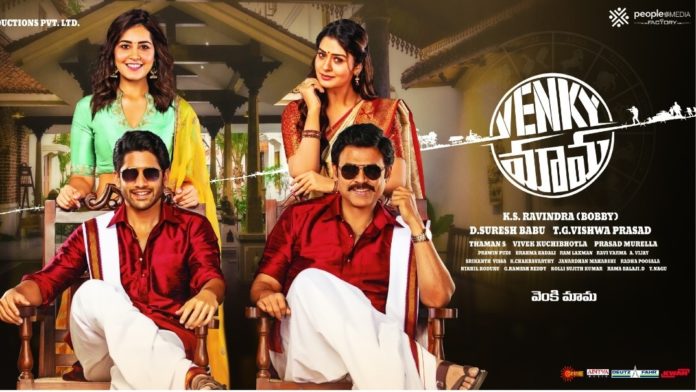 Nasser’s daughter goes against her father and marries a guy. But the couple gets killed in an accident. Nasser believes that the accident took place only due to the bad horoscope. So he keeps his daughter’s son Naga Chaitanya away, but Nasser’s son Venkatesh takes good care of the Chay, right from the childhood.

Bue one fine day Nassar starts believing that as per the horoscope, Venky’s death is going to be in the hands of Chaitanya. What are the steps Nasser took in separating the duo and what did Chaitanya decide after knowing about the horoscope? How did army background appears in this backdrop? Watch the film to know the answers to all the questions

Victory Venkatesh has proved his mettle as an actor one more time by portraying some brilliant emotions in his character in Venky Mama. Naga Chaitanya is also decent in his part. Heroines Payal Rajput does the glamour show. Rashee Khanna is ok.

Venky Mama is anticipated to bet high on comedy as Venkatesh is known for it. A few scenes in parts show the Vintage Venky but not many are impressive. Several comedy scenes appear silly and may go well with the C centre to some extent.

Except for a comedy scene, warning scene and interval bang, nothing went exciting in the first half and thus kills the hopes on the second half. Adding to the disappointment, even second half lacks any interest except for a twist in the climax.

The interval bang has been shot extremely well and gives a good high to the film. But the makers could not live up to the hype in the further episodes.

Kashmir episodes which the makers promoted to be the highlight fail to make any impact.
All the technical aspects of the film fail to make any notable job in the film. The screenplay and direction are a total failure. A BGM for a scene has been inspired from Dalapathi movie and it looks impressive. But rest other BGMs are weak.

Coming to editing, the continuous juggling between present and flashback episodes confuses the audience. The abrupt cuts disturb the mood.

For a concept like Venky Mama, the makers are supposed to bet high on emotion. But the same has been lacked in the film. While the first half appears below average, second half is unbearable and worst. Venky Mama completely fails to reach the expectations as it could not make any notable impact at any point in the film, except for an impressive interval bang.

Finally: Venky Mama- All about uncle and son-in-law.

After a disappointing first half, shockingly even the second half of Venky Mama has nothing much to discuss

4:00 AM: The twist and its lead form the major portion of climax and thus the movie ends on a happy note.

3:56 AM: Some emotional scenes are going on between Venky and Chay.

3:49 AM: Terrorists capture Chay and sends torturing videos to Venky.

3:41 AM: Prakash Raj explains Venky that Chay went on an operation to kill the terrorists who attacked Church.

3:36 AM: Chay leaves house because he reads Venky’s horoscope and finds out that he will be the reason for his uncle’s death. It is then Chay actually decides to leave him and join army. Done with flashback.

3:30 AM: Misunderstanding between Venky and Chay. Police arrests the latter for setting building on fire.

3:26 AM: MLA tries to burn down the school building and hostel, while Karthik is involved in a fight with goons in the same building.

3:14 AM: Venky and Payal likes each other. Vintage Venky comedy scenes are going on.

A comedy scene, warning scene and interval bang are the key highlights of the first half of Venky Mama movie. Except the above mentioned areas, the film appears boring in rest other scenes.

3:03 AM: An out and out mass fight between Venky and goons. Dialogues and BGM is massy and may appear well to masses.

2:57 AM: Nassar calls MLA and asks to take his daughter away from Chay.

2:54 AM: Venky feels bad as he is the reason for break up. Venky asks Chay to go to London. Some emotional scenes are going on.

2:51 AM: Rashee explaining Venky about why she broke up with Venky.

2:46 AM: ‘Yennaallako yennellako’ song started. A retro feel duet between Venky and Payal.

2:39 AM: Nassar trying to send Karthik away from house.

2:30 AM: Venky friend in village is Chammak Chandra.

2:27 AM: Back to interrogation. Army confirms that there is no one by name Karthik in sector 8 regiment. Army thinks venky is lying.

2:21 AM: Chay and Rashee are ex-lovers who broke up eventually. Venky realizes and asks to revive it. Time for flashback love story of Chay and Rashee.

2:17 AM: Comedy scenes between Hyper Aadi, Rashee Khanna and Chay are going on. Boring.

2:13 AM: Rao Ramesh enters as MLA, who aims to build beer factory in school land.

2:08 AM: Harika (Rashee Khanna) enters as MLA’s daughter and Vennela (Payal Rajput) as a school teacher.

2:07 AM: Venky likes army but he doesn’t join army and doesn’t get married as he needs to take care of Chay.

2:04 AM: Scenes between Chay, Venky and Naasar. Chay being nice to grandfather but the latter hates him.

1:58 AM: Chaitanya enters the scene now and his name is Karthik. He goes to village to meet his uncle Venky.

1:55 AM: Movie then opens in Kashmir where terrorists attack Church and kill people. Venky enters Kashmir but gets nabbed by the terrorists and interrogate.

1:48 AM: Nasser rejects daughter’s marriage with a guy as the horoscopes does not match. So the couple elope and get married, but gets killed in an accident. They have a baby boy (Naga Chaitanya) and gets pampered by Venkatesh (Nasser’s son). Nasser stays away from Naga Chaitanya.

1:46 AM: Opening scene in a temple. Mass marriages being performed by Nassar family in a village.

Pawan Kalyan’s special episode of Unstoppable is streaming on Aha Video now and it has a fair few interesting moments. Balakrishna says “those who speak...
Read more
TeluguBulletin.com Rating: 2/5 Story: Nasser's daughter goes against her father and marries a guy. But the couple gets killed in an accident. Nasser believes that the accident took place only due to the bad horoscope. So he keeps his daughter's son Naga Chaitanya away, but Nasser's...Venkatesh- Naga Chaitanya's "Venky Mama" Movie Review