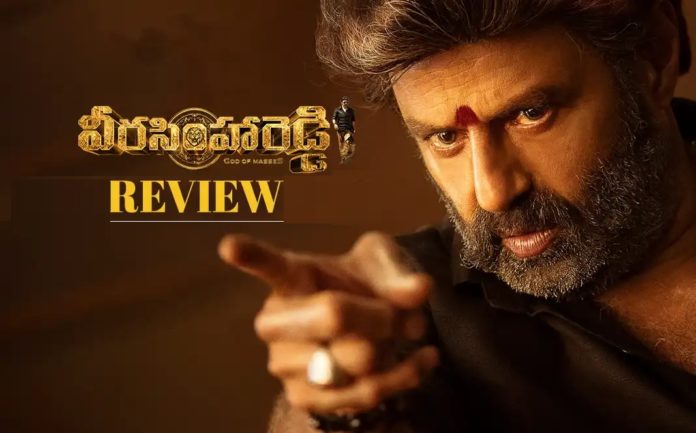 Following the grand success of Akhanda, Nandamuri Balakrishna teamed up with director Gopichand Malineni for an out-and-out mass action entertainer, in the form of Veera Simha Reddy. The film features Shruti Haasan as the leading lady, and has been released today, on the occasion of the Sankranthi festival. Let’s see how the film has turned out to be..

Jai and his mother(Meenakshi) live in Turkey. Meenakshi runs a restaurant and Jai own a car dealership. He falls in love with Sandhya (Shruthi Hassan) who lives in Istanbul. After Sandhya’s father insists to meet Jai’s parents to settle the wedding, Jai’s father Veera Simha Reddy comes to Turkey, which is when Jay meets his father for the first time. Things take a drastic turn around when Veera Simha Reddy comes to Turkey, as his past follows him there. What is that past and what happens forms the rest of the story.

Balakrishna, as always, is in his element as Veera Simha Reddy. He perfectly embodies the raw and rustic nature of Veera Simha Reddy, a role that is tailor-made for the actor who has been seen in similar roles several times before. He is good in the over-the-top action scenes as well, and his dialogues are a treat to his audience.

Shruti Haasan is ok in the movie and dances well in the songs, but doesn’t have anything much to do storywise. Certain forced comedy scenes through her character don’t work well.

Honey Rose, who made her Tollywood debut with the film is the surprising factor of the film, as she is very good in her role. As a mother and as VSR’s love interest , she has done well in the film, and has also contributed well in the glamour department.

Varalaxmi Sarathkumar is perfect in her role, and her emotion is perfectly shown throughout the film. Her scenes with Balakrishna particularly stand out.

The rest of the supporting cast, like Murali Sharma and Naveen Chandra, are good enough in their roles and do the needful as per the script.

Director Gopichand Malineni has come up with  couple of twists in the film, and while they’re good, they are also not novel for the audience. The screenplay lags quite a bit throughout the movie. However, the director failed to incorporate any entertaining/comedy moments into the screenplay. The film feels too long and boring after a certain point. The only saving grace of the film would be Varalaxmi’s emotion track, which “might” appeal to a section of the audience. On the whole, the director seems to have just recycled stories that have already been seen before.

The production values of the film are okay, and the camera work is good. The editing could have been a lot better, with the film’s runtime having been made much crisper.

Verdict: Veera Simha Reddy is a movie that will cater mostly to Balayya’s die-hard fans, for its over the top action sequences. Otherwise, the film is just a routine faction drama that has loud music, action sequences and a routine story, which may not appeal to the general audience.

Veera Simha Reddy is an action film directed by Gopichand Malineni and produced by Mythri Movie Makers. It stars Nandamuri Balakrishna in the titular role alongside Shruti Haasan, Varalaxmi Sarathkumar, Honey Rose and Duniya Vijay. The film score and soundtrack is composed by S. Thaman.

4:00 PM EST : Jay(Balakrishna) owns a Car Dealership in Istanbul. Movie starts with a fight introduction of Balakrisnhna which is an average watch. Jay meets Shruthihasan and falls in love with her.

4:45 PM EST : VSR vs home minister is a direct dig at the ruling party. VSR goes to Istanbul to his son’s engagement with Eesha (Shruthi Hasan). Story happenings move to Istanbul.

First Half Report: First half of the VSR has nothing to offer except the makeover of Senior character. Lacks story & entertainment.2nd half should be exceptionally good to make this at least an average fair.

5:30 PM: Second half starts with flash back of VSR. Jai Balayya song is good, fans will enjoy.

6:30 PM: More emotional scenes to follow. Jay takes a revenge on the villian in a heavy climax scene. Movie comes to an end.

Final Report : #Veerasimhareddy is a routine faction drama that has mass fights that NBK fans expect but lacks comedy & entertainment and feels lengthy.2nd half has better drama and emotional scenes but may not be enough to change the fate of the movie. It has loud music, over the top fights & age old treatment that does not appeal to general audience.

Watch this space for first on net full review of the movie.

First, there were reports that Pawan Kalyan's film with Sujeeth might not have any songs or fights. This became an interesting topic of discussion...
Read more
Movie News

Prabhas is the only Telugu superstar with as many as 4 films in production. These films are Salaar, Adipurush, the one with Maruthi, and...
Read more
Movie News

Shriya Saran is one of those actresses who is aging like fine wine. She is getting hotter by the day and is still containing...
Read more

Telugu Desam Party National General Secretary, Nara Lokesh, is currently on his Yuvagalam padayatra, where he is interacting with the youth of the state....
Read more
Political News

The CBI has asked YCP's Kadapa MP Avinash Reddy to attend the questioning regarding the murder case of YS Vivekananda Reddy. Avinash is scheduled to...
Read more
Political News

The government of Andhra Pradesh recently hit a road bump after the AP high court decided to intervene with their move to appoint an...
Read more
Political News

Nara Lokesh started his Padayatra - Yuvagalam from Kuppam today and he received a warm welcome from the TDP troops in the area. He...
Read more

Telugu Desam Party National General Secretary, Nara Lokesh, is currently on his Yuvagalam padayatra, where he is interacting with the youth of the state....
Read more
Movie News

First, there were reports that Pawan Kalyan's film with Sujeeth might not have any songs or fights. This became an interesting topic of discussion...
Read more
Political News

The latest reports from Telugu media outlets are suggesting that the helicopter carrying the chief minister of Andhra Pradesh YS Jagan Mohan Reddy was...
Read more