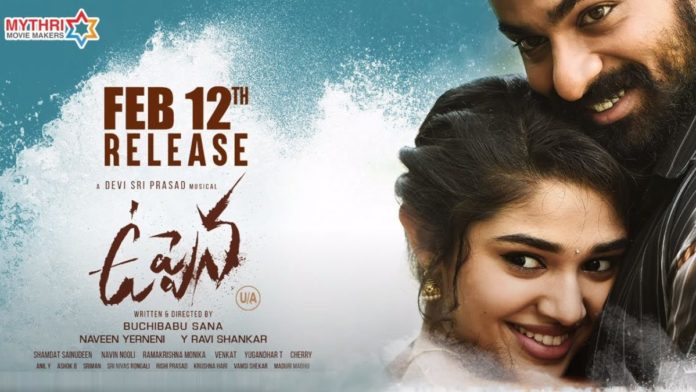 Uppena marks the debut of mega hero Vaisshnav Tej, Krithi Shetty, and director Buchi Babu Sana. The unit has been promoting the film aggressively for the past few days and the supposed love drama is releasing amid good buzz. Scroll on to read our review of Uppena.

The film opens on a dark note as the male lead, Asirwadam aka Asi(Vaishnav Tej) lies wounded and motionless on the beach shore. Cut to flashback, Asi is a fisherman in Uppada who hails from a lower caste. He is in love with Bebamma(Krithi Shetty) right from his childhood days and the latter notices him during her college days and she too falls for him. The young couple often meet secretly and gradually develop a strong relationship. One day, Bebamma’s father Rayanam(Vijay Sethupathi) comes to know about his daughter’s relationship with Asi, a lower caste man and he is enraged. Rayanam is a menacing and caste-centric man who goes to any extent to withhold his higher position in the community. He intends to cut off his daughter’s relationship with Asi. The rest of the story unveils what Rayanam does to Asi in order to obstruct his relationship with Bebamma.

The main driving force of the film is the lead pair, Vaishnav Tej and Krithi Shetty. The two young actors shoulder their respective roles with great composure. Vaishnav Tej does particularly well in love scenes and he really does have attractive eyes. He gets his diction and body language right for this relatively challenging role. Coming to the female lead, Krithi Shetty, she falls under the exclusive category of actresses who look very pretty and can act equally well. The way she emotes in romantic scenes and also carries the right demeanor in emotional scenes is very impressive. Vijay Sethupathi looks menacing. He carries an ominous look all through the film. His attitude and screen presence are top notch.

The artist who plays Thalimpu, male lead’s friend evokes a few laughs. The rest of the star cast including Sai Chand, and Rajeev Kanakala add more novelty to the proceedings.

Talking about the technical aspects of Uppena, Devi Sri Prasad deserves a special mention. His songs built good pre-release fizz and anticipation to the film and now, his background score breathed life into the story. Especially, the soundtrack that has been used to elevate Vijay Sethupathi’s character will have a resounding effect on the audience. Shyam Dutt’s visuals are of top drawer quality. His cinematography adds another layer to Buchi Babu’s story and his visual presentation is one of the main assets of the film. Coming to editing, Naveen Nooli does a fairly decent job with the opening half. However, things go for a toss in the second half as not-so-engaging subplots take the center stage and the narrative slows down at an alarming rate. Action sequences are decent.

Buchi Babu Sana picks a plotline based on casteism and Telugu audience have watched quite a few films with this set-up in the recent past. But he manages to add a new layer to the film by selecting beach backdrop. The much-hyped and talked-about climax portion does not create the desired impact. The execution is not quite right and an ending like this doesn’t sit well with native audiences. The first half is enjoyable with good performances from the lead cast and engaging screenplay. But the second half is anything but impressive. The narrative is snail-paced, the climax is weak and the ending is not convincing enough. Buchi Babu Sana ticks a few right boxes but the film does not meet all the pre-release hype.

The first half of Uppena is more like a breezy ride with good songs, attractive chemistry between the lead pair, and engaging scenes, but the second half is a fiercely bumpy ride. Least bit engaging subplots and a weak ending will leave the audience disappointed.

Watch on Not?: Only for those who love realistic love dramas, the rest can give it a skip.

Uppena has garnered the attention of film buffs. From the trailor, it is evident that it will be a Romeo-Juliet type love story set in a fishing village. Sources say that it will deal with a sensitive subject of caste killings.

09:40 PM CST: 40 minutes into the second half – Proceedings slowed down a lot..need to see if Director can steer it towards an interesting pre-climax and Climax..

09:30 PM CST: 30 minutes into the second half – Scenes revolving around lead pair eloping are on now and the Tempo of the movie is down.. Eshwara song is now on..

09:00 PM CST: 1st half report – Its a Ok-ish to good first half with some lag at times..Lead pair and Vijay’s performances are really good..Songs are ok, BGM for Vijay is top notch, Production values are just ok..Fate of the movie depends on 2nd half proceedings.. stay tuned..

08:45 PM CST: 1 hr into the movie – Love scenes between the lead pair, comedy between hero and friend, Dialogues by Sethupathi (shown as a caste fanatic) are all ok until now..Couple of small fights, which are just ok..

08:20 PM CST: 40 minutes into the movie and Lover scenes are good.. Vaishnav doing a good job, looking confident in love scenes..Special mention Krithi (Sangeetha), she is scoring good in both departments – ease of acting and beauty..Dhak Dhak song is good on screen..

08:00 PM CST: 20 minutes into the movie and a very promising start..Movie opened with Hero lying on the beach with wounds..Director gets into flashback with a fight introduction for Hero with other fishermen gang for a fish..Heroine Krithi introduced in a college bus followed by nee kanulu song..

Jr NTR will soon be wrapping up his portion of RRR and he is scheduled to join hands with Koratala Siva for his next...
Read more
Movie News

Akhil Akkineni is awaiting the release of his upcoming film Most Eligible Bachelor which is helmed by Bommarillu Bhaskar. The film is slated for...
Read more
Movie News

Pawan Kalyan recently tested positive for Covid and he is undergoing treatment to recover from the same. Prior to that, Pawan Kalyan was super...
Read more

The government of the state of Tamil Nadu has announced today that a night curfew would be imposed from 10 PM to 4 PM,...
Read more
Political News

The Telangana Bharatiya Janata Party shocked all after it won the Dubbaka by-polls and won a major share of seats in the GHMC polls,...
Read more
Political News

It is already known that the Bharatiya Janata Party and the Jana Sena party have a strong alliance with one another in Andhra Pradesh....
Read more
Political News

Janasena supremo Pawan Kalyan tested positive for Covid a couple of days ago and he is receiving medical attention now. He is being treated...
Read more

Akhil Akkineni will be joining hands with Surender Reddy for Agent which was officially announced earlier this month. It is billed to be the...
Read more
General News

The Andhra Pradesh Police department is not what it used to be. It is more polarised and divided than ever, and all of its...
Read more
Movie News

Jr NTR will soon be wrapping up his portion of RRR and he is scheduled to join hands with Koratala Siva for his next...
Read more
Political News