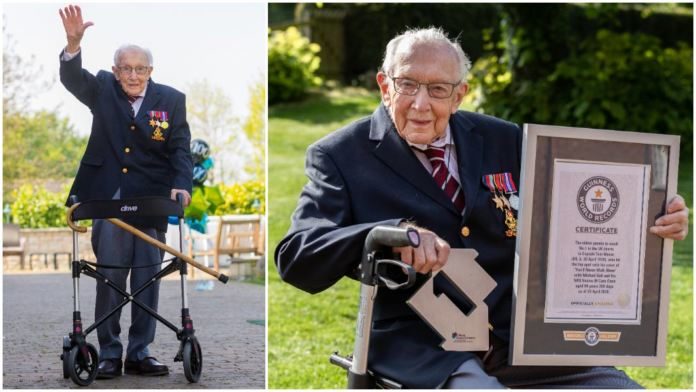 According to scientists, a human can live more than 100 years if he follows proper food habits and with less exposure to pollution. These days, the average life span of humans has become around 60-70 years.

Most importantly, in this COVID-19 crisis period, the governments are warning the elder people not to step out as they are the most vulnerable people. But this 99-year old person in the UK broke two world records at his age which stood as the hot news in the world.

99-year-old Captain Tom Moore (UK) has achieved the record title for the most money raised by charity walk (individual), raising a staggering total of £27,699,581 on just giving as of 21 April 2020.

Previously this record was folded by Terry Fawx from Canada who ran for 143 days with his one leg that too was artificial and raised 14.7 million Canadian dollars.

This British World War II veteran who shot to fame raising millions for health workers fighting the coronavirus has also become the oldest artist to reach No 1 in the UK music singles charts. The song he sang with the famous British Singer Michael Ball has gone viral and tops the chart list.

The people of Britain who are among the worst hit communities in the world could find inspiration in this 99-year old war captain for sure.

Covid-19 created a huge impact on USA. While the economy is falling down and the Covid-19 cases were raising, USA is determined to divert...
Read more
General News

Tough Taskmaster SS Rajamouli is all set to create a visual splendor in his upcoming project RRR. The latest reports suggest that a village...
Read more
Movie News

After Nandamuri balakrishna posted his words on Chiranjeevi and few other heroes of TFI that they are distributing lands among themselves, while they met...
Read more

Covid-19 created a huge impact on USA. While the economy is falling down and the Covid-19 cases were raising, USA is determined to divert...
Read more
Movie News