Trump followers protest in Arizona, as Biden inches towards victory 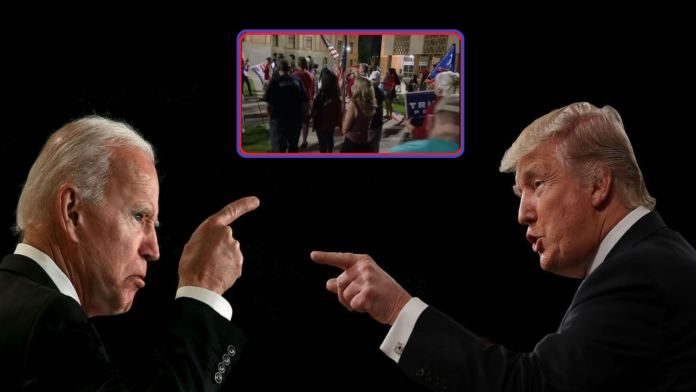 Arizona is inching towards declaring its winner, and so far, Democratic party’s Joe Biden is currently leading, with 50.7% votes. However, Trump supporters are strongly hoping that the ballot votes would make sure that Trump is the victor finally.

The counting of the votes for the state of Arizona, is taking place at the vote counting site in Maricopa County of Phoenix. At least 150 Trump supporters have gathered near the site, and are demanding that the ballot votes be counted till the very last one.

They are repeatedly stating that the Democrats have been up to fraud, to make sure that Joe Biden wins the election, because of which they are demanding for the ballot votes to be counted until the very last one. All of these people have been heard chanting “Count the Vote”, repeatedly, to let their demand be heard.

Keely Varvel, chief deputy recorder for Maricopa County, said counting would continue despite the protest. “We are still planning to finish up our scheduled ballot processing work and report out more results tonight,” Ms. Varvel said. On the other hand, Jim Williams, a 67 year old welder who is a Trump follower, said that he wouldn’t accept Joe Bidden’s victory, and that he wouldn’t want to live under the rule of a Communist.

Many of the people who gathered here were also wielding AR-15 rifles and other firearms, adn were chanting “Fox News Sucks”, after the news channel predicted Joe Biden’s victory in Arizona. Many other channels followed suit after that.

Maricopa County accounts for 60% of Arizona’s population, and the last time a democrat who won Arizona was Bill Clinton in 1996, and Maricopa Country has not voted for a Democrat to be a President since 1948.

On the election front in the whole of US, Joe Biden is leading Trump by 264 to 214, inching Joe towards a hopefully definitive victory.

Breaking: UK becomes the first nation to get regulatory approval for Pfizer-BioNTech vaccine

UK on Wednesday topped the race in getting green signal to deliver vaccine among many contenders. It became the first nation in the world...
Read more

It is known that mega hero, Varun Tej will be seen in a sports drama next. He is playing a boxer in the as-yet-untitled...
Read more
Movie Reviews

Allu Arjun's 'Pushpa' commenced shoot in the second week of November but it needs to be said that the shoot has not been going...
Read more
Movie News

Megastar Chiranjeevi will be kick-starting Vedhalam remake as soon as he is done with Acharya shoot. The pre-production works of the film are being...
Read more
Movie News

Several members of the Telugu Desam Party have been suspended for a day, for the third consecutive day, after the onset of the Winter...
Read more
Political News

With the pandemic of Coronavirus still at large in the world, in the country, and in the Telugu states, the Winter Assembly sessions have...
Read more

It is known that mega hero, Varun Tej will be seen in a sports drama next. He is playing a boxer in the as-yet-untitled...
Read more
Political News

Jana Sena Chief Pawan Kalyan is touring Andhra Pradesh currently, getting to know the various problems that the people of Andhra Pradesh are facing,...
Read more