Thegimpu – Really No Guts & No Glory!! 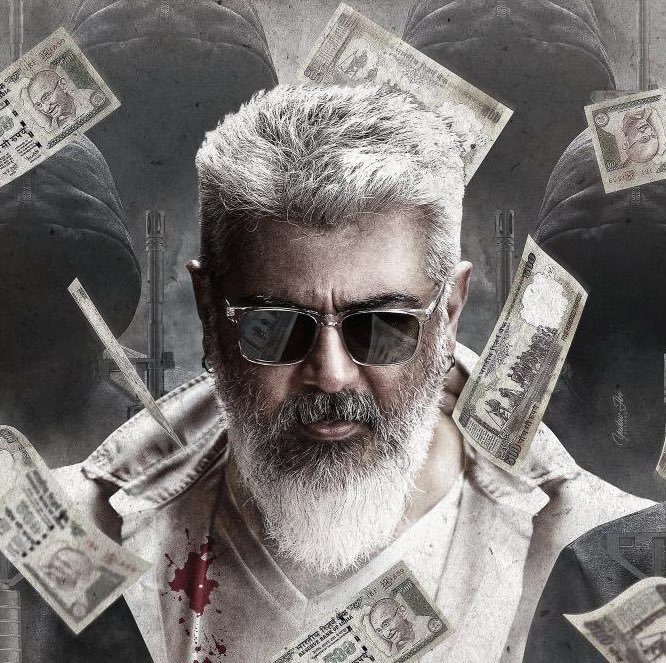 Thegimpu is an action heist film movie written & directed by H.Vinoth which is originally made in Tamil and dubbed into Telugu. The film has Tamil superstar Ajith Kumar & Malayalam actress Manju Warrier playing lead roles while Samuthrakani, John Kokken, Veera, Pavani Reddy, Ajay, Mahanadi Shankar, and others in the supporting roles. The Music is composed by Ghibran. The film is produced by Zee studios & Boney Kapoor.

SI Ramachandran (Ajay) makes a deal with a thieves gang to rob Your Bank in Vizag and later share the looted money worth Rs 500 crores. They plan the heist and enter the bank only to realise that there is another person named Dark Devil (Ajith Kumar) inside the bank who also came to rob the bank. Later a twist unfolds that Dark Devil is actually aiming for Rs 25,000 crores. How the bulk amount comes into the bank? Who leaks the news to Dark Devil? What is the backstory behind the robbery activity? forms the rest of the story.

Ajith Kumar is the only saving grace of the film. He just mesmerizes with his extraordinary screen presence and stylish mannerisms. He is as usual superb in all the action scenes as well. This could easily be one of the best evil roles written for him after Mankatha (Gambler). Watch out for his Michael Jackson moonwalk & his evil smiles in the film. Definitely a treat for all his fans.

Manju Warrier makes a couple of stylish entries into the film but her role is not as impactful as needed. She does her action part well but it would have been more better if her role had a proper justification in the story. Samuthirakani & Ajay are pretty decent in their respective cop roles. Mahanadi Shankar impresses with his hilarious comedy track as the reporter. The rest of the supporting roles fail to register coz of the way their characters have been written.

Director H Vinoth’s presentation is super stylish but he fails big time with his screenplay. Though he tried to talk about a relatable social point on banking frauds and stock market scams, his narrative needed more clarity & elaboration. The film is too fast-paced sometimes where we actually miss out on a few important points. Though he places decent whistle-worthy moments here and there, the film remains underwhelming towards the end.

The trendy background score by Ghibran is one of the major strengths of the film. The songs never work in the narrative and the Telugu songs are very poor to be precise. The camera work by Nirav Shah is top-notch as he presented the entire film on a lavish note. All the action scenes in the waters are well captured. The editing work is a bit disappointing as it is very abruptly cut in many scenes. The production values by Zee studios & Boney Kapoor are grand.

Verdict: On the whole Thegimpu doesn’t have the guts or the glory to end up as a winner this festive season. Except for Ajith’s swagger scenes, there is nothing much that is engaging or entertaining in this middling heist thriller.

Bollywood beauty Mrunal Thakur is bold siren in Bollywood. But her debut Telugu film, Sita Ramam showed her in a homely avatar. But that isn't...
Read more
Movie News

Bollywood beauty Mrunal Thakur is bold siren in Bollywood. But her debut Telugu film, Sita Ramam showed her in a homely avatar. But that isn't...
Read more
Movie News

It is officially announced that Harish Shankar will be directing Pawan Kalyan for his next film. This is a big ticket project. The latest news...
Read more