The Ghost Review: Not ghostly enough 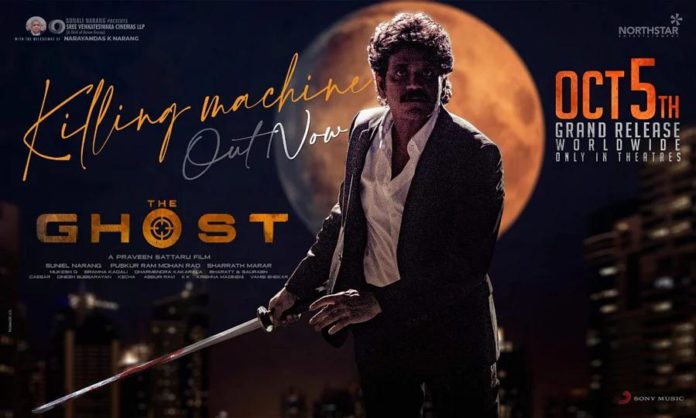 King Nagarjuna’s latest film, The Ghost, which has been carrying good expectations around it, directed by Praveen Sattaru, has been released today, on the occasion of Dussehra. Let’s take a look at how the film is.

Vikram (Nagarjuna) is an interpol cop works on a contractual basis. Movie starts with glimpses of his past, as we navigate through his present he is seen protecting his sister and niece. Nagarjuna goes after the underworld in Dubai in his past. Why he has to protect his sister, how his past is linked to present and what finally happens forms the rest of the story.

As usual, Nagarjuna is good in his role, carrying the entire movie on his shoulders, but to no avail in the end. He looks good and is effortless even in the action sequences. Sonal Chauhan is perfect in her role as well.

Gul Panag and Anikha Surendran, who are seen in key roles, do well in their roles, and the sequences they share with Nag are interesting.

The rest of the cast is good in what they’re given, including Ravi Varma, Srikanth Iyengar and Jaya Prakash.

Director Praveen Sattaru takes a familiar concept, but gives his own spin, in The Ghost. His screenplay is tight in parts, while it lags a bit in the others. The director is known for his unique mark in films, which seems lacking in The Ghost, with several sequences feeling like they’ve been stretched too thin.

The background score in the first half of the film is especially good, elevating every scene of the movie, and so are the action sequences. However, they get too much in the second half, disconnecting the audience from the rest of the story.

The cinematography of the film is top-notch, and so are the production values, which are very clearly shown throughout the entire film. The editing could have been a lot crisper though.

The Ghost is burdened with too many action sequences in the second half and very little emotional connect. The movie doesn’t carry director Praveen Sattaru’s mark, passable in bits and pieces, and can even test your patience through its runtime.

Final Report: Overall movie is not engaging, the flashback story of The Ghost did not work out well which director banked on for the under current emotion in the movie.

06.45 A.M: Second half of the movie starts on a good note but doesn’t sustain it through. Action sequences are decent but lack of good plot wastes it all. It tests your patience towards the end.

06.00 A.M: Second half of the movie starts with a good action sequence. Story movies to Vikram ( Nagarjuna) flash back in which he goes after underworld in Dubai

First half Report: First half of the Ghost is not engaging for the most part. Pre Interval blast episode is good. Good BGM and rich visuals waste with forced emotion in lot of scenes.

05.35 A.M: Nagarjuna Saving his niece is an Okay Scene. Picks up a bit of pace after that. Pre interval scene is engaging.

05.05 A.M: Nagarjuna is an interpol contractor cop waiting for his next assignment. He has a Haunting past. His step sister calls him to rescue her daughter

On the occasion of Naga Chaitanya's birthday, the makers of his upcoming film #NC22 today unveiled the first look and title of this Telugu-Tamil...
Read more
Movie News

Vijay Deverakonda is in a rough patch now. His latest outing Liger is a box office disaster of epic proportions and it is the...
Read more

On the occasion of Naga Chaitanya's birthday, the makers of his upcoming film #NC22 today unveiled the first look and title of this Telugu-Tamil...
Read more
Movie News

Vijay Deverakonda is in a rough patch now. His latest outing Liger is a box office disaster of epic proportions and it is the...
Read more