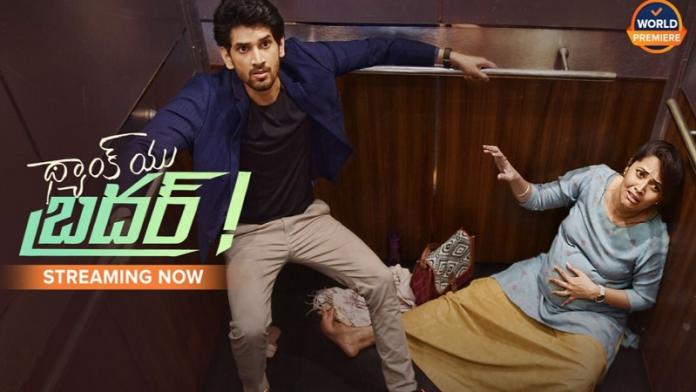 Starring Anasuya and newcomer Viraj in the lead roles, Thank You Brother skipped theatrical release and premiered on Aha Video today. The film is billed to be an intense drama thriller. Let us see what it has to offer.

Story: A spoils youngster Abhi, and a pregnant woman, Anasuya are stuck in an elevator. The situation worsens after Anasuya goes into labor as they wait for help to arrive. Can Abhi save Anasuya? If yes, what are the complications surrounding it? The answers to these questions form the rest of the story.

Anasuya bags an impactful role and she delivers a fine performance. Her realistic portrayal of the seemingly complex character is the main driving force of the film. Debutante, Viraj is a decent performer. He does particularly well in the climax portion. Mounika Reddy, Anish Kuruvilla, Viva Harsha, and Adarsh Kiran play supporting roles and they are in their elements.

The film scores well on the technical front. Guna Balasubramanian’s background score is impressive and it elevates the vibe of the proceedings. The cinematography is neat. The film has a run-time of around 90 minutes but the opening sequences are patchy and could have been chopped off. Editing could have been better.

The director Ramesh Raparthi picks a plot which has great premise. But he fails to present his story in a convincing manner. The first 30 minutes are dedicated to establish the male lead’s character and this portion is neither novel nor engaging. The USP of the film is the elevator episode but the way it is presented is really subpar. The severity of the situation is presented through tight camera angles and background score but what it really needed was better writing and good emotional connect. The whole “Covid lockdown” subplot does not gel with the plot. The film ends up as an insipid drama.

Verdict: Thank You Brother is another film which has a good premise but fails to impress owing to bland narration and uninspiring writing. Anasuya’s performance is one of the very few positives of the film. Had the penultimate and climax portion been handled well, the film would have ended up at least as a one-time watch but sadly that isn’t the case.

Watch or Not: Strictly for those who like experimental films. But keep your expectations in check.

The makers of Sree Vishnu's Raja Raja Chora have unveiled the teaser of the film, which looks like a different attempt by the ‎Gaali...
Read more
Movie News

As per latest reports from Bollywood media portals, the makers of Ram Charan and Shankar’s RC15 have locked happening beauty Kiara Advani for the...
Read more
Movie News

Actor Sara Ali Khan has shared her experience when she first met her new half-brother. It is well know that Sara's father, Saif Ali...
Read more

Executive capital of AP will be shifted to Vizag soon: Vijaysai Reddy

YCP MP Vijayasaireddy said that the executive capital of Andhra Pradesh will be shifted to Visakhapatnam very soon. Speaking to the media, he said...
Read more
Political News

The Maoists have outraged over CM Jagan's rule in AP through a letter. Recently, they have released a letter in the name of Ganesh...
Read more
Political News

The Dalit communities in AP, especially in Kostha Andhra are opposing the appointment of YCP leader Thota Trimurthulu as an MLC under the Governor's...
Read more
Political News

The by-elections for the Huzurabad constituency have become the talk of the town, and the most interesting aspect in Telangana politics right now, way...
Read more

The makers of Sree Vishnu's Raja Raja Chora have unveiled the teaser of the film, which looks like a different attempt by the ‎Gaali...
Read more
General News

In the recent times, the Kumbh Mela drew flak among none-Hindus and atheists who condemned it with a presupposition that it could be a...
Read more
Movie News

As per latest reports from Bollywood media portals, the makers of Ram Charan and Shankar’s RC15 have locked happening beauty Kiara Advani for the...
Read more