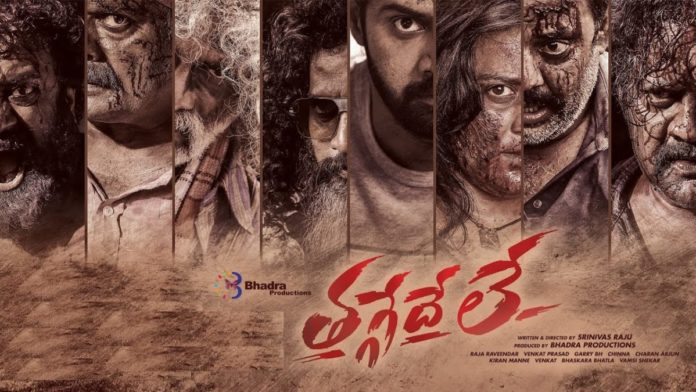 Naveen Chandra’s first solo movie in a while, Thaggedhe Le, has been released today. Let’s see how the film has turned out to be.

Thaggede Le is about a man who gets mixed up with people connected to drugs unexpectedly, and then meets Inspector Chalapathi, for whom the Dandupalyam batch are out on a vengeance to kill, because he got them locked up. What is the connection between all of these people, and what happens ultimately forms the rest of the story.

Naveen Chandra is perfect in his role, and carries out his role quite well, emoting appropriately in every scene. He stands his ground even when paired with much senior actors.

Ravi Shankar steals the show with his performance, especially in the pre-climax, where his interaction with the Dandupalyam batch turns out to be the major highlight of the entire film. He perfectly carries out his role.

The two leading ladies are good enough in their roles. Divya Pillai especially does her part quite well, as the innocent and loving wife. The rest of the supporting cast is good in their roles.

Special mention to the Dandupalyam cast, who carry out their characters very well throughout the film, keeping the universe of Dandupalyam completely intact.

Director Srinivasa Raju seems to have given a befitting end to his Dandupalyam series, with the death of the Dandupalyam batch in the film. Thaggedhe Le is a well-written script but could have been a lot better, as there are many areas where the film lags, especially in the first half.

The background score by Chinna is good, aiding the scenes appropriately. The camera work by Venkat Prasad is also good enough.

The production design is adequate, but the editing of the film could have been a lot better, especially in the first half.

Verdict: Thaggede Le is a mildly entertaining action thriller at best, with parts of it more interesting than the rest.. The latter half of the film would cater very well to fans of Dandupalyam, and for the rest of the audience, it is just passable.