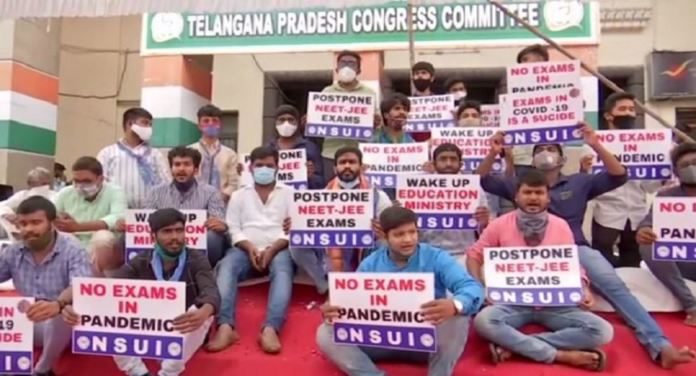 After considering UGC appeal, SC agreed for the conducting of exams. A bench headed by Justice Ashok Bhushan delivered the key verdict.

However, a review petition has been filed in SC against order permitting JEE Main and NEET exams in September. There are six petitioners from six different states who sought reconsideration of the apex court order dated August 17. Today chief ministers of seven non-BJPruled states will protest against Supreme Court verdict about JEE, NEET exams.

On the other hand Telangana High court decision is pending on the PIL that is filed by NSUI chief seeking postponement of entrance exams amid COVID pandemic.

Members of National Students’ Union of India, the student wing of the Congress began an indefinite hunger strike at Pragathi Bhavan in Hyderabad. Venkat Balmoor, president of NSUI said the state administraton is going anti to students which is pathetic and gross injustice. He lashed out that it’s a reckless behaviour of central and state government and said that students are becoming hopeless and suicidal.

“Numerous districts in the state are worst effected and there is lack of transport. Parents are worried to send their child in these troubled times. We also sent notices to state education Minister. But no decision has been taken out of irresponsibility. As a last resort I’m going to fast until death. It is either justice or my death. Im ready for both,” asserted Venkat.

Covid-19 shook the entire world for a while in 2020. Now, a bacteria is aiming to compete with Corona Virus. Brucellosis, a bacteria which...
Read more
General News

Support for Joe Biden from Indian community in USA is raising day by day. Even though Joe Biden's stand on Kashmir didn't seem impressive...
Read more