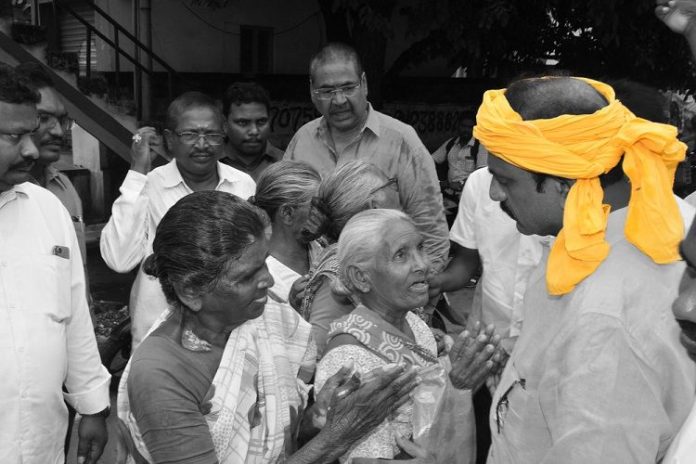 Breaking the rule of wooing the voters during the elections, it seems, TDP leader from Eluru, Badeti Bujji has come up with a unique campaign.

During his recent campaign in Eluru, one of the voters has questioned Bujji, about the pending promises in the last election. He said that the houses construction are still pending.

Aggrieved over this, Bujji warned the voter saying, “na sangathi neeku telvadu thokka theestha” . He further warned not to raise such questions and indulge in unnecessary problems. Right after Bujji’s warning, the residents in the colony were seen going against the leader. They reportedly protested against him and chased him till he is out of the colony.

The video was leaked by one of the residents of that constituency and is now going extremely viral on the internet. The Janasena activists have released the video on the social media through their pages and are now criticizing the TDP for its alleged rowdy politics. While the political parties mostly rely on the old mistakes of their opposition parties and thus criticize them, it seems, Bujji is breaking the trend and is willing to give the fresh stuff to his dearest oppositions, and thus get criticized with the latest mistakes.

In the recent times, even Nandamuri Balakrishna has faced a similar situation during his political campaign in Hindupuram. Few women have stopped the campaigning vehicle and protested against Balakrishna with the water pots. Shocked over this, Balakrishna went against the local authority for allegedly not bringing the issue into his notice.

This is the kind of awareness, the voters are supposed to have and only then the quality leaders will come forward and the false ones go back. Such revolts from the public, would alert the leaders, and thus come up with good politics, the netizens commented below the video, on the social media.