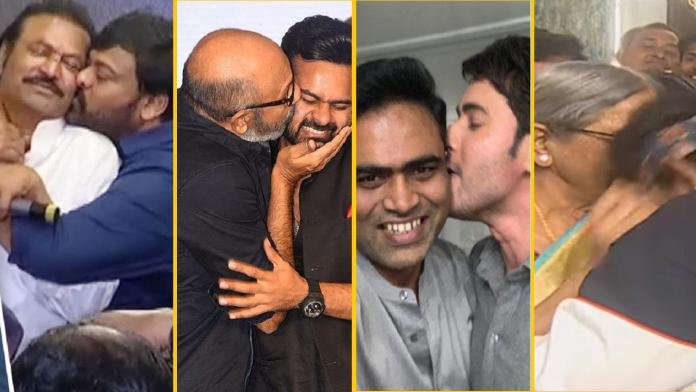 Recently we saw Chiranjeevi kissing Mohan Babu on the stage at Hotel Park Hyatt, the event was the diary releasing function. Mohan Babu said something in good humour and intention and Chiranjeevi couldn’t hold back his emotions, he hugged and kissed him.

Though many people said it was meant for the galleries, we recollect a few more fake PDAs (public display of affection). The other one is Satya Raj kissing Sai Dharam Tej at the prerelease event. Wonder what the hero did to win his affection in the sixty days of shoot that an otherwise reserved Satyaraj surprised all by kissing Tej.

Tej’s acting also was not so great that it deserves mention and a kiss. Another unlikely kiss came from Mahesh Babu to Vamsi Paidipally during the success meet of Maharshi. The film is a hit or not is still a question but the hero wanted to show people that it is a hit so he kissed Paidipally. Before that a photo of him kissing his wife Namratha did the rounds on social media.

This couldn’t have happened without his approval. On the new year eve party to celebrate the release of Beautiful, RGV’s mom kissed him more than once for the cameras. Now can we say this is fake? It is for you to decide.